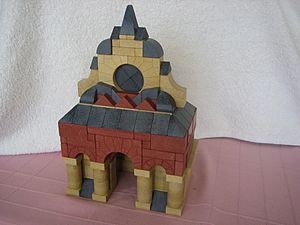 Anchor stones can be used to imitate many architectural styles, such as this Baroque palace. 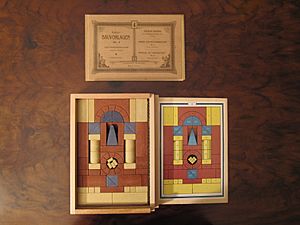 Anchor Stone Blocks (German: Anker-Steinbaukasten) are components of stone construction sets made in Rudolstadt, Germany, marketed as a construction toy.

Anchor Stone pieces are made of a mixture of quartz sand, chalk, and linseed oil (German Patent 13,770; US Patent 233,780), precisely pressed in molds so that they fit together perfectly. The stones come in three colors in imitation of the red brick, tan limestone, and blue slate of European buildings. They are not recommended for play by children under 3 years of age because of their small size (CE No. 0494). 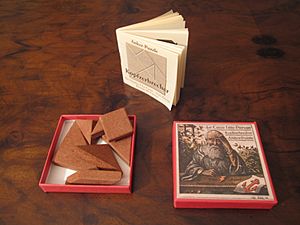 The new factory manufactures and sells all 15 of the sets in the main series (GK-NF) of Anchor sets as well as some sets modelling the Michaelis Basilika in Hildesheim and the Brandenburg Gate. They are widely available in Germany, including in the KaDeWe department store in Berlin, and are readily available online. A new series of sets for younger children called Die neue Steinzeit ("the new Stone Age") was introduced in 2012. The sets tend to be expensive, but high-quality; antique sets are just as playable now as when they were originally produced. Sets being produced today are made to the same specifications as the antique ones, so they can be easily integrated. In addition to construction sets, the artificial stone formula has been used to produce simple flat puzzles, such as tangrams.

Scientists, engineers, and designers like Max Born, J. Robert Oppenheimer, Albert Einstein, Ivan Sutherland and Walter Gropius developed their creativity by playing with Anchor blocks. Anchor blocks have been exhibited in the Louvre and Deutsches Museum. They appear in a fairly prominent role in Jan Švankmajer's fantasy film Neco z Alenky as, among other things, the home of the White Rabbit. They also support a plot sequence in The Diamond in the Window, by Jane Langton.

All content from Kiddle encyclopedia articles (including the article images and facts) can be freely used under Attribution-ShareAlike license, unless stated otherwise. Cite this article:
Anchor Stone Blocks Facts for Kids. Kiddle Encyclopedia.