The Andean mountain cat (Leopardus jacobita) is a small wild cat native to the high Andes that has been listed as Endangered on the IUCN Red List because fewer than 2,500 individuals are thought to exist in the wild. It is traditionally considered a sacred animal by indigenous Aymara and Quechua people.

It was first described by Emilio Cornalia who named it in honour of Jacobita Mantegazza.

The Andean mountain cat has ashy-gray fur, a gray head, ears and face. The areas around the lips and cheeks are white; two dark brown lines run from the corners of the eyes across the cheeks. There are some black spots on the forelegs, yellowish-brown blotches on the flanks, and up to two narrow, dark rings on the hind limbs. The long bushy tail has 6–9 rings, which are dark brown to black. The markings of juveniles are darker and smaller than those of adults. The skulls of adult specimens range in length from 100.4 to 114.8 mm (3.95 to 4.52 in) and are larger than those of the pampas cat and domestic cat.

The Andean mountain cat and pampas cat look similar. This makes it difficult to identify which cat is observed and makes correct estimations of populations problematic. This can be especially difficult when attempting to gain correct information from the observations of individuals that have seen one of these cats but are not aware to look for specific features to distinguish between the two. 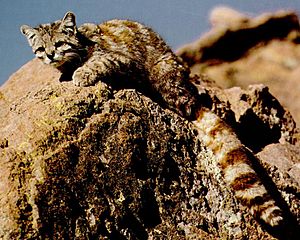 The Andean mountain cat lives only at high elevations in the Andes. Records in Argentina indicate that it lives at elevations from 1,800 m (5,900 ft) in the southern Andes to over 4,000 m (13,000 ft) in Chile, Bolivia and central Peru. This terrain is arid, sparsely vegetated, rocky and steep. The population in the Salar de Surire Natural Monument was estimated at five individuals in an area of 250 km2 (97 sq mi). Results of a survey in the Jujuy Province of northwestern Argentina indicates a density of seven to 12 individuals per 100 km2 (39 sq mi) at an elevation of about 4,200 m (13,800 ft).

Its habitat in the Andes is fragmented by deep valleys, and its preferred prey, mountain viscachas (Lagidium) occur in patchy colonies. Across this range, the level of genetic diversity is very low.

It is also probable that mountain chinchillas were previously important prey of the Andean mountain cat before their populations were drastically reduced due to hunting for the fur trade.

Six different species of carnivores live in the Andes Mountain range. Apart from the Andean cat, there are two other cat species: the pampas cat and the puma. The puma is a large predator, while the Andean and Pampas Cat are medium-sized predators. These two medium-sized predators are very much alike. They both hunt within the same territory. They hunt the same prey, the mountain viscacha (Lagidium viscacia), a rodent. The viscacha makes up 93.9% of the biomass consumed in the Andean cat's diet while the Pampas Cat depends on it for 74.8% of its biomass consumption. Both of these cats depend on a specific prey to make up a large portion of their dietary needs. In some areas, the mountain viscacha will make up 53% of the Andean cat's prey items. This is because the other prey items are so significantly smaller that even though the Andean cat will successfully hunt, kill, and eat a mountain viscacha half the time, the mountain viscacha is so much larger than the other food items, it makes up more substance. They also hunt frequently during the same periods. During one study, both the Andean cat and the Pampas Cat were seen most frequently during moonless nights; the second most sightings of these cats were during full moons.

By using the residents' observations of Andean cats in coupled pairs with their litters, it is theorized that the mating season for the Andean cat is within the months of July and August. Because kittens have been seen in the months of April and October, this could mean that the mating season extends into November or even December. A litter will usually consist of one or two offspring born in the spring and summer months. This is common with many other species that also have their young when food resources are increasing.

The following table lists the threat to the Andean cat and proposed interventions to mitigate them:

The Andean cat is listed on CITES Appendix I. It is protected in all the countries of its range.

The Andean Cat Alliance was formed in 2003 by representatives from Argentina, Bolivia, Peru and Chile with the aim of fostering research and conservation of the Andean cat.

All content from Kiddle encyclopedia articles (including the article images and facts) can be freely used under Attribution-ShareAlike license, unless stated otherwise. Cite this article:
Andean mountain cat Facts for Kids. Kiddle Encyclopedia.