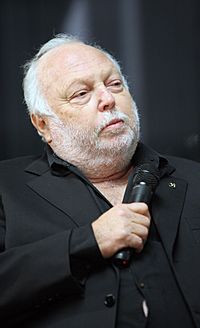 Andrew G. Vajna (born András György Vajna; 1 August 1944 – 20 January 2019) was a Hungarian-American movie producer. He was born in Budapest. Vajna studied at the University of California, Los Angeles. He was known for his works in Nixon, Terminator 3: Rise of the Machines and Medicine Man.

All content from Kiddle encyclopedia articles (including the article images and facts) can be freely used under Attribution-ShareAlike license, unless stated otherwise. Cite this article:
Andrew G. Vajna Facts for Kids. Kiddle Encyclopedia.