Andrew Molera State Park is a relatively undeveloped state park on the Big Sur coast of California, United States, preserving land as requested by former owner Frances Molera. Situated at the mouth of the Big Sur River, the property was part of the Rancho El Sur land grant, and later owned by Californio pioneer John Bautista Rogers Cooper and his descendants. Cooper's grandchildren Andrew and Frances Molera inherited the property from their mother in 1918. Andrew popularized the artichoke in California in 1922, and died in 1931. In 1965, Frances sold the property to The Nature Conservancy, stipulating that the park to be created should be named for her brother.

Activities at the park include hiking, fishing and beachcombing, with miles of trails winding through meadows, beaches and hilltops. A primitive walk-in trail camp, popular with hikers and bikers, is located approximately one-third of a mile from the parking area. It is considered the most reliable surfing area in Big Sur. 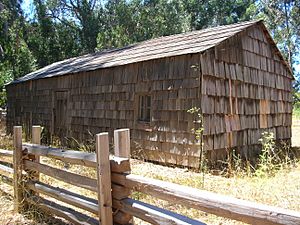 The Ventana Wildlife Society has established a Discovery Center within the park. The Discovery Center includes exhibits on local wildlife, including the California condor, and a bird banding laboratory. Scientists and other laboratory employees give regular tours of Andrew Molera State Park, explaining the flora and fauna that are unique to the area.

Andrew Molera State Park has over 20 miles (32 km) of hiking trails. Some run along the shore, others along the Big Sur River, while still others climb to high ridges with views of the entire Big Sur coast.

The only camping available in the park is in a 24-site walk-in campground. Registration is on a first-come, first-served basis. The campground is particularly popular with European visitors. No dogs are allowed on the trails or campground.

John Bautista Rogers Cooper traded Rancho Bolsa del Potrero y Moro Cojo in the northern Salinas Valley with Juan Bautista Alvarado for the Rancho El Sur where the state park is located today. When the Mexican government ceded California to the United States after the Mexican–American War, the Land Act of 1851 required grantees to provide proof of their title. Cooper filed a claim for Rancho El Sur with the Public Land Commission in 1852, and he received the legal land patent after years of litigation in 1866. Cooper's son John Bautista Henry Cooper built a home on the ranch in 1899, but died soon after. John B.H. Cooper's sister Francisca Guadalupe Amelia Cooper inherited the southern portion of the rancho. When she died, her two children Andrew J. and Francisca (known as Frances) Molera inherited the land, although they lived their adult lives in San Francisco.

Andrew Molera, who was very obese, died of a sudden heart attack in 1931. His sister Frances became the sole owner of the family's Big Sur property. She arranged in 1965, almost 100 years after her grandfather John B.R. Cooper had gained title, to sell 2,200-acre (890 ha) of the southern portion of the original Cooper land grant east of Highway 1 to The Nature Conservancy with the intent that it should become a state park. The conservancy held the beachfront property in trust until the state of California could finance the purchase of the land.

Frances Molera stipulated that the park should be named Andrew Molera State Park in honor of her brother. She also added provisions to the sale requiring that the land remain relatively undeveloped. She died in 1968.

When the California state park administration began to propose considerable development for the park, the Nature Conservancy threatened to revoke the sale arrangement, and the state backed down. The remainder of Frances Molera's half of the original Rancho El Sur east of Highway 1 was purchased by the state soon after her death.

All content from Kiddle encyclopedia articles (including the article images and facts) can be freely used under Attribution-ShareAlike license, unless stated otherwise. Cite this article:
Andrew Molera State Park Facts for Kids. Kiddle Encyclopedia.