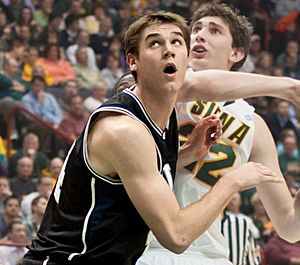 Andrew Smith (September 9, 1990 – January 12, 2016) was an American basketball player. He was a center. He played college basketball for the Butler Bulldogs (Butler University) from 2009 to 2013. He played professionally for BC Neptūnas in Lithuania from 2013 to 2014. He was born in Washington, D.C. and grew up in Indianapolis, Indiana.

Smith died from non-Hodgkin lymphoma on January 12, 2016 in Indianapolis, at the age of 25.

All content from Kiddle encyclopedia articles (including the article images and facts) can be freely used under Attribution-ShareAlike license, unless stated otherwise. Cite this article:
Andrew Smith Facts for Kids. Kiddle Encyclopedia.