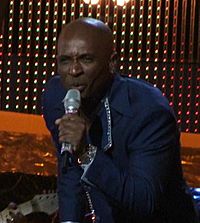 Andy Abraham (born 17 July 1964, London) is a British singer-songwriter. He is best known for finishing second in the 2005 series of The X Factor in the United Kingdom.

Abraham was the representative for the United Kingdom in the Eurovision Song Contest 2008 with the song Even If. He became the second UK act ever to come in last place in Eurovision.

All content from Kiddle encyclopedia articles (including the article images and facts) can be freely used under Attribution-ShareAlike license, unless stated otherwise. Cite this article:
Andy Abraham Facts for Kids. Kiddle Encyclopedia.