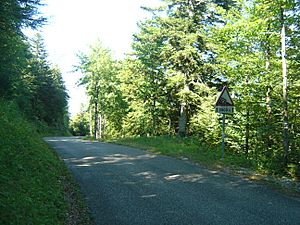 A steep stretch on the D120 through the Col du Grand Colombier.

Anglefort is a commune. It is found in the Auvergne-Rhône-Alpes region in the Ain department in the east of France. In 2009, 960 people lived in the commune. The inhabitants are the Clafordans. The local economy is mostly based around a silicon factory and an EDF dam used for hydroelectricity. The most important monuments in the commune are the Château d'Anglefort, a 13th-century castle, and the ruins of the Château de la Rochette. The Château d'Anglefort is listed as a monument historique. Famous people from Anglefort include Jacques-François Besson, bishop of Metz in the 19th century.

All content from Kiddle encyclopedia articles (including the article images and facts) can be freely used under Attribution-ShareAlike license, unless stated otherwise. Cite this article:
Anglefort Facts for Kids. Kiddle Encyclopedia.