Angophora floribunda, commonly known as the rough-barked apple, is a common woodland and forest tree of the family Myrtaceae native to Eastern Australia. Reaching 30 m (100 ft) high, it is a large tree with fibrous bark and cream-white flowers that appear over the Austral summer. It grows on alluvial soils on floodplains and along watercourses. Much of the land it grew on has been cleared for agriculture. 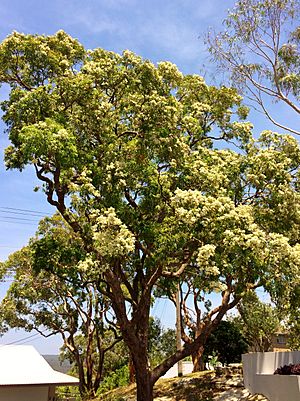 Angophora floribunda is a large, wide, spreading tree growing to a height of 30 m (100 ft). The trunk is often gnarled and crooked with fibrous grey bark. Like all members of the genus Angophora, the dull to glossy green leaves are arranged oppositely along the stem. 5.5 to 15 cm (2.2–6 in) long and 1–5 cm (0.4–2 in) wide, they are lanceolate to ovate and attached to the stems by 0.6–1.5 cm (0.2–0.6 in) long petioles. The leaves in the western parts of the range are narrower than those in more coastal regions. The cream-white flowers appear from November to March.

It can be confused with A. subvelutina, but the latter has leaves that are heart-shaped at their base and lacking petioles, arise from the stem.

The rough-barked apple was described by James Edward Smith in 1797 as Metrosideros floribunda, having been collected by Surgeon-General of New South Wales, John White in 1794. It was growing from seed in Empress Josephine's arboretum at Malmaison by 1804, when Étienne Pierre Ventenat catalogued it in his Jardin de la Malmaison. The species name is derived from the Latin floribunda "abundant flowers". Robert Sweet gave it its current name in 1830. Common names include rough-barked apple, apple box, rusty gum, gum myrtle and Boondah.

Genetic work has been published showing Angophora to be more closely related to Eucalyptus than Corymbia, and in 2000 botanist Ian Brooker coined the name Eucalyptus florida for this species as Eucalyptus floribunda and E. intermedia had already been used for other eucalypts.

This tree hybridises with the broad-leaved apple (Angophora subvelutina). The Charmhaven apple (Angophora inopina) from the vicinity of Wyee on the Central Coast of New South Wales is closely related and may be a dwarf form of A. floribunda.

The rough-barked apple regenerates by regrowing from epicormic buds after bushfire. Trees live for more than a hundred years. The grey-headed flying fox (Pteropus poliocephalus) and little red flying fox (P. scapulatus) eat the flowers, and the white-plumed honeyeater (Lichenostomus penicillatus) forages among the flowers. The tree is used as a nesting site by the rare regent honeyeater (Xanthomyza phrygia). The jewel beetle species Curis caloptera, Stigmodera andersoni, S. terminatis and S. vigilans also visit the flowers, the latter three species being fairly specific in their preference for Angophora floribunda. The longhorn beetle species Paroplites australis and Agrianome spinicollis have been recorded from the rough-barked apple.

Female scarlet myzomelas (Myzomela sanguinolenta) have been observed tearing off bark to use in building their nests.

This is a large plant generally unsuitable for any but the largest gardens.

All content from Kiddle encyclopedia articles (including the article images and facts) can be freely used under Attribution-ShareAlike license, unless stated otherwise. Cite this article:
Angophora floribunda Facts for Kids. Kiddle Encyclopedia.