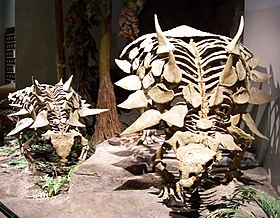 Skeletal reconstructions of Gastonia at the Utah Museum of Ancient Life

They have been found in western North America, Europe and East Asia. Good specimens are rare; most are known only from fragments, and bits of their armour.

All content from Kiddle encyclopedia articles (including the article images and facts) can be freely used under Attribution-ShareAlike license, unless stated otherwise. Cite this article:
Ankylosauridae Facts for Kids. Kiddle Encyclopedia.