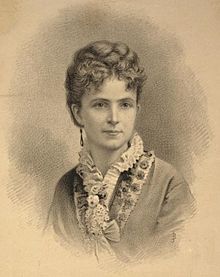 Ann Eliza Young (September 13, 1844 – December 7, 1917) also known as Ann Eliza Webb Dee Young Denning was one of Brigham Young's fifty-five wives and later a critic of polygamy. She spoke out against the suppression of women and was an advocate for women's rights during the 19th century.

All content from Kiddle encyclopedia articles (including the article images and facts) can be freely used under Attribution-ShareAlike license, unless stated otherwise. Cite this article:
Ann Eliza Young Facts for Kids. Kiddle Encyclopedia.