Sparks is a city in Washoe County, Nevada, United States. It was founded in 1904 and incorporated on March 15, 1905, and is located just east of Reno. The 2010 U.S. Census Bureau population count was 90,264. It is the fifth most populous city in Nevada.

Sparks is located within the Reno–Sparks metropolitan area.

In the early historical period, the area that is now Sparks was inhabited by the Washoe people. Euro-American settlement of the area began in the early 1850s, and the population density in the area remained very low until 1904 when the Southern Pacific Railroad built a switch yard and maintenance sheds there. The city that sprung up around them was first called Harriman after E. H. Harriman, president of the Southern Pacific. The city was quickly renamed Sparks after John Sparks, the Governor of Nevada at that time. 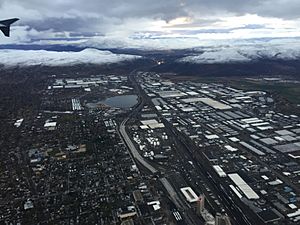 Sparks remained a small town until the 1950s, when economic growth in Reno triggered a housing boom north of the railroad in the area of Sparks. During the 1970s, the area south of the railroad started to fill up with warehouses and light industry. In 1984, the tower for the Nugget Casino Resort was finished, giving Sparks its first, and currently only, high-rise casino. In 1996, the redevelopment effort of the B Street business district across from the Nugget that started in the early 1980s took a step forward with the opening of a multi-screen movie complex and the construction of a plaza area. This area, now known as Victorian Square, is a pedestrian-friendly district that hosts many open-air events.

Under direction of the U.S. Environmental Protection Agency, a comprehensive dynamic water quality computer model, the DSSAM Model, was developed (Earth Metrics, 1987) to analyze impacts of a variety of land use and stormwater management decisions throughout the 3,120-square-mile (8,100 km2) Truckee River basin; this model was used to develop a set of surface runoff stormwater management measures for Sparks in the 1980s.

According to the U.S. Census Bureau, Sparks has a total area of 35.9 square miles (93.0 km2), of which 35.8 square miles (92.6 km2) is land and 0.15 square miles (0.4 km2), or 0.47%, is water. Stormwater surface runoff from the city drains into the Truckee River, a sensitive waterway that empties into Pyramid Lake, which has no outlet and is the habitat of two endangered species.

There were 33,502 households out of which 36.5% had children under the age of 18 living with them, 47.7% were headed by married couples living together, 13.0% had a female householder with no husband present, and 32.5% were non-families. Of all households 24.3% were made up of individuals and 8.3% were someone living alone who was 65 years of age or older. 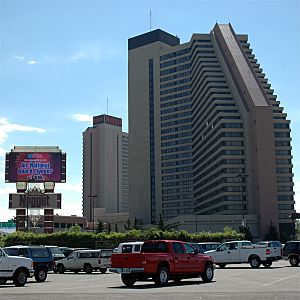 Cultural events include the Best in the West Nugget Rib Cook-off. 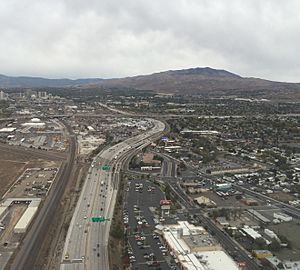 I-80 runs through central Sparks.

The Regional Transportation Commission of Washoe County (RTC) operates an extensive city bus system that services a majority of the cities of Reno and Sparks.

Sparks is served by the nearby Reno–Tahoe International Airport.

The Union Pacific Railroad runs east–west through the center of Sparks. The Union Pacific has a significant rail yard south of I-80, just south and adjacent to the Nugget Hotel/Casino towers in downtown Sparks, and is a central part of the area's industrial park. Passenger rail service to the Sparks Amtrak Station ended in 2009.

The city of Sparks will soon be connected directly to south Reno by a massive road construction project known as the Southeast Connector. It is a northerly extension of Veterans Parkway to the Sparks Boulevard at Greg Street. It will serve as an expressway, with only 2 signaled intersections along its 5.5 mile stretch (one at Pembroke Drive and one at Mira Loma Drive), and constitute a major arterial connection between Reno and Sparks. It will provide an alternative route to existing, overcrowded routes such as the 395/580 freeway, Rock Boulevard, and McCarran Boulevard. Construction began in late 2013, and its completion is expected in 2017, but the project is currently ahead of both schedule and budget.

Sparks is also gearing up for the record of decision on a major, $1.1 billion (estimated) arterial road project, one that will turn a large portion of Pyramid Highway through nearby Spanish Springs into a controlled access, high speed arterial road that connects directly with the US 395 freeway via a complex interchange at the current Parr Boulevard connection. This will directly connect Spanish Springs, a major population center (parts of which are annexed with the city of Sparks), located in the valley just north of Sparks, with the existing Reno/Sparks freeway system which consists currently of Interstate 80 and US 395. This project will also offer more direct freeway system and inter-valley connections to and from Sun Valley, another major population center of the Reno/Sparks metropolitan statistical area. Sun Valley is located just north of Reno and just west of Spanish Springs, and is home to nearly 20,000 residents as of the 2010 census.

All content from Kiddle encyclopedia articles (including the article images and facts) can be freely used under Attribution-ShareAlike license, unless stated otherwise. Cite this article:
Sparks, Nevada Facts for Kids. Kiddle Encyclopedia.