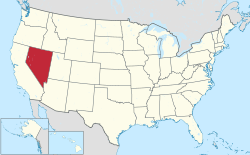 Map of the United States with Nevada highlighted

Nevada is a state located in the Western United States. According to the 2010 United States Census, Nevada is the 36th most populous state with &&&&&&&&02700691.&&&&&02,700,691 inhabitants but the 7th largest by land area spanning 109,781.18 square miles (284,332.0 km2) of land. Nevada is divided into 17 counties and contains 19 incorporated municipalities. Incorporated places in the state are legally described as cities, except for Carson City, which has no legal description. Nevada's incorporated municipalities cover only 1% of the state's land mass but are home to 56.7% of its population.

All content from Kiddle encyclopedia articles (including the article images and facts) can be freely used under Attribution-ShareAlike license, unless stated otherwise. Cite this article:
List of cities in Nevada Facts for Kids. Kiddle Encyclopedia.