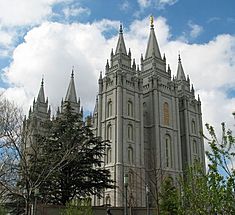 The Church of Jesus Christ of Latter-day Saints (LDS Church) is the largest group in the Mormon movement. It was started in 1830 in New York by Joseph Smith. They believe that Joseph Smith was a prophet who restored the church Jesus Christ set up on earth when he was alive. They teach that they are the only church that has the full gospel. They also believe that the Father, Son and Holy Spirit are three separate individuals, but all have the same purpose. LDS scriptures include the Bible, the Book of Mormon, the Doctrine and Covenants, and the Pearl of Great Price. Members of the church, who are often called Mormons, are known for being active in missionary work. They also believe in the importance of families.

L.D.S. members or Mormons believe in the Holy Scriptures including the Bible and Book of Mormon- another Testament of Jesus Christ. They also believe that it is important for families to spend a lot of time together, and that after they die, they can live together forever. Mormons do not drink alcohol, coffee, or tea; smoke tobacco; or use other drugs. They meet once a week on Sunday for church, where they have the sacrament and listen to short talks or sermons. They also have Sunday School to learn more about their religion. The Church also has activities during the week. Mormons also have buildings called temples. These are the most holy buildings in their religion. After a temple has been dedicated, only Mormons that are living lives in accordance with the teachings of the church can go in the temple.

The church was founded by Joseph Smith in 1830 in upstate New York. It was probably due to the Book of Mormon, which Smith had translated from gold plates that were buried in a nearby hill. Smith's followers first went to Kirtland, Ohio in 1831. The first Mormon temple was built in Kirtland, and by the mid-1830s, there were over 17,000 Mormons. In 1838, the Mormons settled in Independence and Far West, Missouri. Near here, Smith wanted to build a utopian (ideal) community. The Mormons were driven out because people in Missouri did not trust Mormons. This was called the Mormon War. The Mormons then moved to Nauvoo, Illinois. There, Smith started to practice polygamy and tried to start a "theodemocracy," which combined Mormon rule with American democracy. In 1844, an attempt by Smith to shut down the Nauvoo newspaper led to Smith being accused of treason, followed by him being killed by a mob.

After Smith's death, there was a controversy over who should replace Smith. Brigham Young led most of the Mormons to Utah in 1847. When Utah became a territory in 1850, it was somewhat of a theocracy. Later in the 1850s, there was conflict between the Mormons and the U.S. government over control of the territory. This was called the Utah War. The Mountain Meadows massacre was part of the Utah War. In the late 19th and early 20th centuries, Mormons settled the Mormon Corridor in Utah and surrounding states in the Western United States. Some of the places they settled were Mesa, Arizona; San Bernardino, California; Las Vegas, Nevada; and Cardston, Alberta. By 1890, the Mormon church had built temples in three Utah cities.

Brigham Young died in 1877. Around that time, the U.S. government made polygamy against the law. Polygamy had been practiced by Young and the Mormon church since the 1840s. Laws by the U.S. government led to many Mormon leaders going into hiding, and many polygamists being sent to jail. In 1890, the church stopped polygamy. This is thought to be the beginning of the modern era of the Mormon church.

In the early 20th century, the Mormon Church grew, and opened its first temples outside of Utah. Soon into the 20th century, tithing (giving money to the Church) was made a part of being a good Mormon. In 1995, Gordon Hinckley became President. He got the church to build many temples in the United States and elsewhere around the world. The current President, Thomas Monson, took office when Hinckley died in 2008.

Young people are encouraged to go on missions when they get old enough. Men may go from two years after they are 18 years old (as long as they have graduated from high school), and women may go for 18 months after they are 19 years old. Before an August 2012 change in church policy, men had to be 19 in most countries, and women throughout the world 21, before they could go on missions. More men go on missions than women do. These missionaries go to a "Missionary Training Center" for a few months where they learn how to be good missionaries, and then live in another place for their mission. The Church tells them where they need to go. Then they work with one other missionary who is the same gender as they are (called a "companion"), and change companions often so they are not always with the same person. Missionaries will go to people who live near them and teach them about the Church, and baptize people who want to join the Church. They also help people around them, even if these people are not in the Church. Often they help by building houses for people who need them.