Anna Adams Gordon (1853–1931) was an American social reformer, songwriter, and, as national president of the Woman's Christian Temperance Union when the Eighteenth Amendment was adopted, a major figure in the Temperance movement.

Gordon was born on July 21, 1853, in Boston, Massachusetts, to James M. and Mary Clarkson Gordon, both Christian abolitionists. When she was three, her family moved to Auburndale. She went on to attend Boston High School, Lasell Seminary, and Mount Holyoke College. She spent a year abroad in San Sebastián with her sister, Alice Gordon Gulick, who had started a school for girls there in 1871. 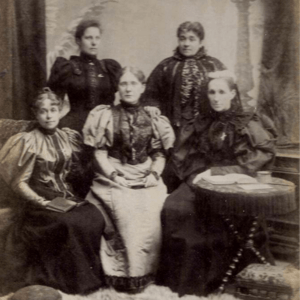 In 1877, Gordon met Frances E. Willard at a Dwight L. Moody revival meeting, in the building where Willard was holding temperance meetings. Gordon's younger brother Arthur had died just days before, a traumatic event which had, as Willard later wrote, driven Gordon "Godward". The two became close friends, with Gordon continuing to play organ for Willard's meetings. Gordon eventually moved into Willard's residence as her personal secretary. Gordon subsequently followed her employer on her travels through the United States, Canada and Europe, spending a year in England, mostly as the guests of Lady Henry Somerset.

Gordon and Willard remained close friends until Willard's death in 1898, at which time Lillian M. N. Stevens became president of the Woman's Christian Temperance Union, with Gordon as vice-president. That same year, Gordon also wrote a memorial biography of Willard (expanded and reprinted in 1905). Upon Lillian Stevens' death in 1914, Anna Adams Gordon became president of the WCTU.

During the First World War, Gordon was instrumental in convincing US President Woodrow Wilson to harden the federal government's policies against the manufacture of alcoholic beverages, most notably by criminalizing the use of foodstuffs to make alcohol. Later, in 1919, temperance organizations scored a major victory with the ratification of the Eighteenth Amendment to the United States Constitution, which fully established prohibition in the United States. After this success, the WCTU under Gordon's guidance began to turn more towards temperance enforcement, and causes peripheral to the temperance movement, such as citizenship for immigrants, women's rights in the workplace, and child protection.

In November 1922, she was elected president of the World Women's Temperance Union (WWCTU), and resigned her presidency of the national WCTU organization.

As a leader in the WCTU, Gordon was a staunch believer in the need to interest children in temperance at a very early age. To that end, she authored a number of books of stories, verse, and song aimed at children, as well as publications for adults. Sales of her books were said to have surpassed a million copies. Her temperance songs became especially successful and were translated into multiple languages. She was also the editor of the Union Signal, the news organ of the WCTU, and The Young Crusader, the newspaper of the Loyal Temperance Legion, the WCTU's children's branch.

All content from Kiddle encyclopedia articles (including the article images and facts) can be freely used under Attribution-ShareAlike license, unless stated otherwise. Cite this article:
Anna Adams Gordon Facts for Kids. Kiddle Encyclopedia.