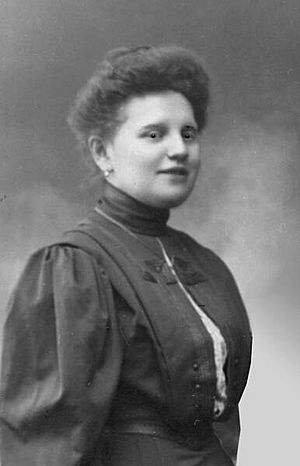 Anna Demidova (1878 – July 17, 1918) was a Lady in Waiting for Tsarina Alexandra of Russia. She was exiled with the Romanov family to Tobolsk and Ekaterinburg after the Russian Revolution of 1917. She was also killed with them on July 17, 1918. She was later canonized as a martyr by the Russian Orthodox Church Outside Russia in 1981 for being hurt by the Soviet. Her nickname was "Nyuta" and she was described as a tall blonde.

All content from Kiddle encyclopedia articles (including the article images and facts) can be freely used under Attribution-ShareAlike license, unless stated otherwise. Cite this article:
Anna Demidova Facts for Kids. Kiddle Encyclopedia.