The Anne Spencer House, in Lynchburg, Virginia, United States was, from 1903 to 1975, the home of Anne Spencer, a poet of the Harlem Renaissance.

The Pierce Street House was built in 1903, by Edward Spencer and the surrounding area includes a large garden and a one-room retreat called Edankraal, where Spencer did much of her writing. The word "Edankraal" is a combination of "Edward," "Anne," and "kraal," the Afrikaans word for enclosure or corral. The house is a two-story modified Queen Anne style, shingle residence. Its two-bay facade is divided equally between a recessed section, covered with a hipped roof, and a slightly projecting gable-roofed bay to the right. On the first floor, one can find a living room, dining room, sunroom, front hall, and kitchen. The second floor includes four bedrooms, a full bath, and a sunroom. The third floor, which is not generally open to the public, was originally a "man cave" for Edward featuring a pool table and half bath, but later became another area for the Spencer's grandchildren. The front hall of the house reveals themes central to Anne Spencer's life. The use of color and mirrors bring the outside in, creating a garden of light and colors on the interior of the Spencer home. Edward's innovations are evident even in this small space—there's a phone booth tucked under the staircase, arched doorways, leading into the front hall and leading into the living room. Crown molding graces the ceiling and doorways. 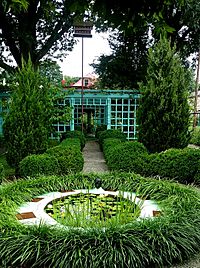 Fountain in the gardens at the Anne Spencer House museum in Lynchburg, Virginia.

The house was modified periodically as the family grew and their social lives expanded. Edward creatively recycled used materials, incorporating windows, doors, handrails, or other cast-off materials into useful components for his home. A screened porch was eventually enclosed as a cozy den, and the lattice from the porch was re-used to make an entry into the garden. Guggenheimer's Department Store in downtown Lynchburg, Virginia had no more use for some sheets of copper that were in a window display. Edward used the copper to cover, shape, and enhance the recessed paneling below the chair rail of the dining room. Bright, red leather, padded doors, originally part of the all-black Harrison Movie Theater on Fifth Street in Lynchburg, Virginia, were re-used in the kitchen and led to a side porch. Massive, oversized banister stair railings were salvaged and re-used in the attic “dormitory room” Edward re-furbished for the visiting grandchildren in later years. He also installed a second bathroom there, which is modestly screened only with a simple hand-drawn curtain.

It was listed on the National Register of Historic Places in 1976. It is located in the Pierce Street Historic District.

Anne Spencer was the first Virginian and first African-American to have her poetry included in the Norton Anthology of American Poetry. She was also a committed activist for equal rights, and her house also served as a political center of the community. Spencer and her husband Edward had petitioned to start a local chapter of the National Association for the Advancement of Colored People and hosted James Weldon Johnson in their home as he assisted in creating the chapter.

All content from Kiddle encyclopedia articles (including the article images and facts) can be freely used under Attribution-ShareAlike license, unless stated otherwise. Cite this article:
Anne Spencer House Facts for Kids. Kiddle Encyclopedia.