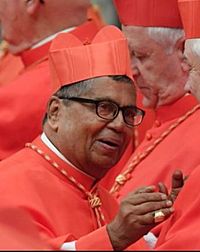 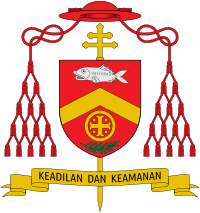 Fernandez was previously the bishop of the Diocese of Penang, where he was bishop from 17 February 1978, until his transfer to Kuala Lumpur.

Fernandez was created a cardinal by Pope Francis in the consistory on 19 November 2016. He was the first Malaysian to be made a cardinal.

In November 2019, Fernandez was diagnosed with tongue cancer. He died on 28 October 2020 in Kuala Lumpur from the disease, aged 88.

All content from Kiddle encyclopedia articles (including the article images and facts) can be freely used under Attribution-ShareAlike license, unless stated otherwise. Cite this article:
Anthony Soter Fernandez Facts for Kids. Kiddle Encyclopedia.