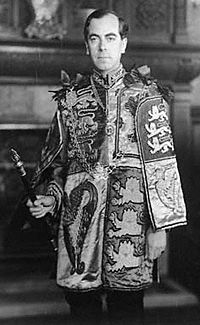 Sir Anthony Richard Wagner (6 September, 1908–5 May 1995) was an officer of arms from England. Wagner wrote many books about heraldry. He became Portcullis Pursuivant in 1931 and then served in the Army during World War II. He became Garter King of Arms in 1961 and served until 1978. Wagner was made a knight in 1961. Even though he was blind when he was older, he still served at the College of Arms until he died in 1995.

All content from Kiddle encyclopedia articles (including the article images and facts) can be freely used under Attribution-ShareAlike license, unless stated otherwise. Cite this article:
Anthony Wagner Facts for Kids. Kiddle Encyclopedia.