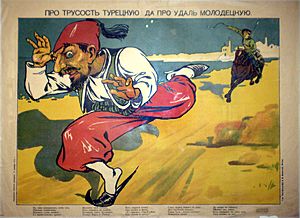 A World War I Russian propaganda poster depicting an imagined Turk running away from a Russian.

Anti-Turkism or Turkophobia is a term of being fearful, racist and discriminative against the Turkish people or Turkic countries.

The term refers to intolerance not only against the Turks across all regions, but also against Turkic groups as a whole, including Azerbaijanis, Crimean Tatars and Turkmens. It is also applied on groups who developed in part under the influence of Turkish culture and traditions while converting to Islam, especially during Ottoman times, such as Albanians, Bosniaks and other smaller ethnic groups around Balkans during the period of Ottoman rule. It can also refer to racism against Turkish people living outside of Turkey following the Turkish diaspora.

The main historic enemies of Turkic people are considered to be Greeks, Armenians, Kurds and Serbians.

All content from Kiddle encyclopedia articles (including the article images and facts) can be freely used under Attribution-ShareAlike license, unless stated otherwise. Cite this article:
Anti-Turkism Facts for Kids. Kiddle Encyclopedia.