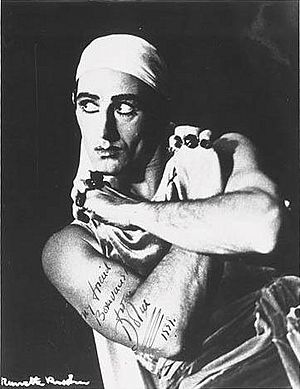 Dolin in The Prodigal Son, Ballets Russes, during the Australian Tour of 1939

Dolin was born in Slinfold in Sussex as Sydney Francis Patrick Chippendall Healey-Kay but was generally known as Patrick Kay or "Pat" to his friends. He was the second of three sons of Henry George Kay (1852-1922) and his wife, Helen Maude Chippendall Healey (1869-1960), from Dublin. He trained at Serafina Astafieva's school at The Pheasantry in London's King's Road. He joined Sergei Diaghilev's Ballets Russes in 1921, was a principal there from 1924, and was a principal with the Vic-Wells Ballet in the 1930s. There he danced with Alicia Markova, with whom he went on to found the Markova-Dolin Ballet and the London Festival Ballet.

He joined Ballet Theatre when it was formed in 1940 and remained there as a dancer and choreographer until 1946.

Dolin wrote several books, including the autobiography Ballet Go Round (1938) and Alicia Markova: Her Life and Art (1953). He was knighted in 1981. He is featured in the documentary film A Portrait of Giselle.

He was the subject of This Is Your Life in April 1978 when he was surprised by Eamonn Andrews at London's Royal Academy of Dance.

Upon Dolin's death, dancers Jelko Yuresha and Belinda Wright inherited the rights to his choreography of Giselle, Pas de Quatre, and his acclaimed original ballet, Variations for Four. Yuresha and Wright danced—and later staged—productions of these ballets with dance companies around the world, designing original costumes and sets for those performances.

All content from Kiddle encyclopedia articles (including the article images and facts) can be freely used under Attribution-ShareAlike license, unless stated otherwise. Cite this article:
Anton Dolin Facts for Kids. Kiddle Encyclopedia.