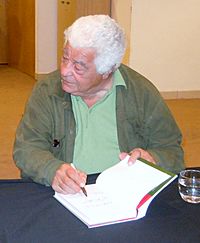 Carluccio has been called "the godfather of Italian gastronomy", with a career of more than 50 years. He was best known for his television appearances, including his partnership with fellow Italian chef Gennaro Contaldo, and their BBC Two television series Two Greedy Italians.

He wrote many books about cooking.

Carluccio died on 8 November 2017 from complications of a fall in London at the age of 80.

All content from Kiddle encyclopedia articles (including the article images and facts) can be freely used under Attribution-ShareAlike license, unless stated otherwise. Cite this article:
Antonio Carluccio Facts for Kids. Kiddle Encyclopedia.