Aquarium of the Bay facts for kids

Aquarium of the Bay is a public aquarium located at The Embarcadero and Beach Street, at the edge of Pier 39 in San Francisco, California. The aquarium is focused on local aquatic animals from the San Francisco Bay and neighboring rivers and watersheds as far as the Sierras.

The Aquarium of the Bay is a Smithsonian Affiliate, accredited by Association of Zoos and Aquariums (AZA) and certified as a Green Business by the city of San Francisco.

The aquarium was originally scheduled to be opened in the summer of 1988, but construction on the aquarium was delayed due to protests from merchants on Fisherman's Wharf and San Francisco Bay environmental groups, and ground was not broken until July 1995. Specific objections included the amount of fill required (an additional 24,000 square feet (2,200 m2) would need to be reclaimed from the Bay) and a potential violation of the city's 1990 Proposition H, which prohibits nonmaritime use of waterfront property. The aquarium was privately owned by a partnership of Questar of New Zealand, Aquabay Inc., and Pedersen Associates (The Chronicle Publishing Company, which owned the San Francisco Chronicle, was a minority partner in Pedersen).

Original estimates for attendance in the final environmental impact report ranged up to 28,000 daily visitors on the weekend in its inaugural year, and the aquarium was forced to limit attendance to no more than 12,600 visitors per day to gain approval. Some of the conditions imposed by the Bay Conservation and Development Commission when it issued the permits included requirements to use only species found in San Francisco Bay and to provide educational and outreach programs. In addition, the aquarium was forced to rent overflow parking spaces at Levi's Plaza and pay subsidies to Muni to fund additional buses to Pier 39 to handle the expected crowds. Together, these traffic abatement measures would cost the aquarium US$100,000 ($136,000 in 2022) in 1996. In addition, the California Academy of Sciences (CAS) was to receive annual payments of US$200,000 ($265,000 in 2022) for eight years, starting in 1997, to compensate for the projected decrease in visitors to Steinhart Aquarium, but the payments were never made. Willie Brown was involved in the negotiations leading to the annual payments. 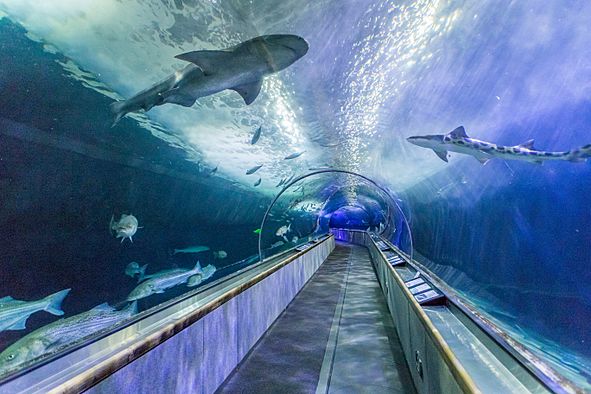 Fifteen months after opening, attendance was poor, with only 3,500 tickets sold per day on average (2,800 to 3,900 per day during the summer of 1996, reaching a peak of 5,700 on 4 July 1996), far fewer than original estimates of 9,100 daily tickets in a building with a capacity of 12,600 daily visitors. UnderWater World responded by cutting ticket prices to US$12.95 ($17.19 in 2022), the city planning commission removed the requirement for subsidised parking and buses, and Pier 39 vowed to paint the exterior with murals, create joint marketing opportunities with other San Francisco institutions, and bring in more impressive animals. Despite these measures, attendance remained poor and some unimpressed visitors quipped the aquarium should be renamed "Underwhelming World." Other visitors were confused by the aquarium's content, which had no whales or large sharks despite large exterior murals featuring the same. UnderWater World filed for Chapter 11 bankruptcy on 10 March 1999.

Renamed to Aquarium of the Bay

UnderWater World was sold to a group led by BNP Paribas in June 2000, who announced plans to rename it to Aquarium of the Bay and add more sea animals in 2001. Attendance had continued to decline down to approximately 1,000 daily visitors in 2001. The original aquarium was remodeled at a cost of nearly $2 million and relaunched as Aquarium of the Bay during a private party on the evening of 12 July 2001.

After restoring the aquarium to solvency, BNP Paribas put the Aquarium of the Bay up for sale in August 2005. The Bay Institute was approached to potentially enter a partnership prior to the sale, but the Institute did not have the funds required to purchase the aquarium outright. A local businessman, Darius Anderson, owner of Kenwood Investments, put up the funds to create a competitive bid, with a condition allowing The Bay Institute to purchase it from Kenwood Investments in a few years' time at a predetermined price, which would eventually transform the aquarium's mission from entertainment to a nonprofit education and research center.

Bids were presented to the Bay Conservation and Development Commission in November 2005, whose executive director Will Travis stated all bidders agreed to comply with prior permit conditions (only Bay species, education and outreach mission). The Bay Institute/Kenwood Investments offer was selected in June 2006, beating out a competing bid from Ripley Entertainment and a late bid from Merlin Entertainments. The Bay Institute would exercise its option to purchase the aquarium, completing its acquisition of the Aquarium of the Bay in June 2009 for US$9,500,000 ($9,500,000 in 2022).

The aquarium has over 50 sharks from species such as:

The aquarium also has skates, bat rays and thousands of other animals including eels, flatfish, rockfish, wrasse, gobies, kelpfish, pricklebacks, sculpin and sturgeons.

A river otter exhibit opened on June 28, 2013. Snow is placed in the otter enclosure periodically during the winter during what are called "Otter Snow Days".

Since coming under the control of The Bay Institute, Aquarium of the Bay staff have assisted in tagging sevengill sharks in an effort to study the life and activities of the species, which has a nursery ground in San Francisco Bay. Aquarium of the Bay has collaborated with a researcher named Matt Savoca at UC Davis to study olfactory reception in anchovies and plastic uptake. The aquarium also worked with a Smithsonian research for a few years to try to catalogue and remove an invasive kelp species, though that project is no longer active. Additionally, Aquarium of the Bay has performed and collaborated in several research projects in relation to elasmobranchs, and sevengill sharks and Pacific angel sharks specifically.

The aquarium is divided into four exhibit areas.

This is the aquarium's largest exhibit. It includes 300 feet (91 m) of tunnels and features thousands of aquatic animals and other sea creatures such as jellies. The exhibit is a recreation of the San Francisco Bay.

North American river otters are the most playful residents in the aquarium. Watch them swim, romp and wrestle. Experience the otter feeding and learn about their barrier free training.

All content from Kiddle encyclopedia articles (including the article images and facts) can be freely used under Attribution-ShareAlike license, unless stated otherwise. Cite this article:
Aquarium of the Bay Facts for Kids. Kiddle Encyclopedia.