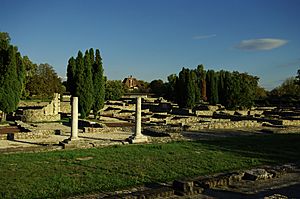 Ruins of the old town

Aquincum was an ancient city, situated on the North East of Pannonia in Roman Empire. The ruins of the city can be found today in Budapest, the capital of Hungary. It is believed that Marcus Aurelius lived there some time. Aquincum was settled by a Celtic tribe and was a military base at that time (1 century AD). After AD 106, Aquincum became the capital city of the Roman Empire.

In the middle of the 4th century, Aquincum often experienced Sarmatian attacks from the north. The city was destroyed by 350 AD. Germans and Attila the Hun invaded the region during 409 AD.

Many historic artifacts have been collected in the local Aquincum Museum which was opened in 1894. There is a historical reproduction of the hydraulic system in museum. There are also the ruins of the Roman era aqueduct in the city.

All content from Kiddle encyclopedia articles (including the article images and facts) can be freely used under Attribution-ShareAlike license, unless stated otherwise. Cite this article:
Aquincum Facts for Kids. Kiddle Encyclopedia.