Arbor Low is a well-preserved Neolithic henge in the Derbyshire Peak District, England. It lies on a carboniferous limestone plateau known as the White Peak area. The monument consists of a stone circle surrounded by massive earthworks and a ditch.

The monument includes about 50 large limestone blocks, quarried from a local site, which form an egg-shaped circle. There were probably 41-43 stones originally, but some are now in fragments. They range in size from 1.6 to 2.1 metres (5 ft 3 in to 6 ft 11 in), with monoliths of between 2.6 and 2.9 metres (8 ft 6 in and 9 ft 6 in). One stone is partially upright; the rest are all lying flat. Although it is often stated that the stones have never stood upright, it is possible that they had originally been set upright in shallow stone holes. In the centre of the circle lie at least six smaller blocks, originally believed to have been set in a rectangle, known as the cove.

Few henge monuments in the British Isles are as well preserved.

Human skeletal remains were discovered close to the cove during excavations between 1901 and 1902. Other finds have included flint scrapers, arrowheads, and bone and antler tools.

A large Bronze Age round cairn or barrow was built later, to the east of the henge, using material taken from the earth bank. It was excavated in 1845 and found to contain a cremation burial, flint and bone artefacts, and two pots similar to Late Neolithic Peterborough ware now in the care of Weston Park Museum.

Arbor Low is part of a larger complex, and is linked by an earth ridge to the earlier Neolithic oval barrow of Gib Hill 320m away.

The bank and ditch of the henge, as well as its two entrances, were probably established in the Late Neolithic period, with the stones added later, some time before 2000 BC. The site seems to have been in use until into the Bronze Age, which was when the outer bank was reconstructed so that the round barrow could be erected. Both the earthworks and the stoneworks are probably later than the nearby Gib Hill. 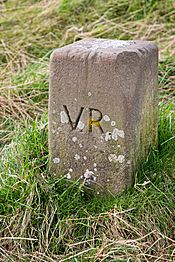 One of the VR markers, indicating the Victorian area of statutory protection

Arbor Low was one of the first ancient monuments to be given statutory protection, on 18 August 1882. Small stone markers engraved VR and GR (for Victoria Regina and Georgius Rex) still stand around the henge, demarcating the protected area.

The henge stands on private farmland, but is accessible to the public. As of September 2020, an entrance fee of £1 per adult is requested. Children can enter free of charge.

All content from Kiddle encyclopedia articles (including the article images and facts) can be freely used under Attribution-ShareAlike license, unless stated otherwise. Cite this article:
Arbor Low Facts for Kids. Kiddle Encyclopedia.