Archedictyon (plural = archedictya) is the name of a hypothetical scheme of wing venation of the common ancestor of all winged insects.

The nature of the archedictyon is an important in the taxonomic classification of the large, primitive Palaeozoic insects known as Palaeodictyoptera. It was used for this purpose as early as 1854. A National Museum of Natural History database for the study of ants, wasps, bees and termites describes the archedictyon as:

According to a 1999 paper on the evolution of flght in Palaeoptera the cross veins of some Palaeodictyoptera may be an adaptive feature. 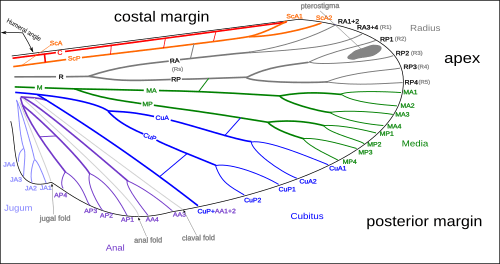 Venation of insect wings, based on the Comstock–Needham system

The archedictyon is believed to have contained between six and eight longitudinal veins, but current understanding of the design is based on a combination of fossil data and speculation.

The "Comstock-Needham system" designed by two entomologists describes these veins and their branches:

Crossveins are named based on their relative position to the more prominent longitudinal veins:

In extant insects, the term implies a retention of primitive characteristics but not necessarily a simplicity of form. Modern insects with wings to which the term archedictyon has been applied include the termite Mastotermes darwiniensis from Australia and the praying mantis Orthodera novaezealandiae. from New Zealand.

The term is also used in the discussion of phasmids. Then it refers to a network of non-directional veins in the costal region of the wing or in the elytron.

All content from Kiddle encyclopedia articles (including the article images and facts) can be freely used under Attribution-ShareAlike license, unless stated otherwise. Cite this article:
Archedictyon Facts for Kids. Kiddle Encyclopedia.