Archie Harrison Mountbatten-Windsor (born 6 May 2019) is the son and only child of Prince Harry, Duke of Sussex, and Meghan, Duchess of Sussex. He is seventh in line of succession to the British throne and the youngest great-grandchild of Queen Elizabeth II. 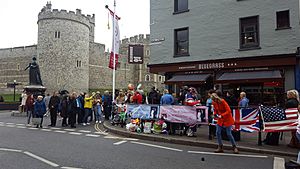 Mountbatten-Windsor was born at 05:26 BST (04:26 UTC) on 6 May 2019. His father described him as "a bit overdue". The place of birth has not been revealed. The media speculate that he was born either at Frogmore Cottage, the couple's home, or at a London hospital. Several landmarks were illuminated in different colours to mark the birth, including Niagara Falls, the CN Tower, and the London Eye. His name was announced on 8 May.

Mountbatten-Windsor is descended from the British royal family on his father's side and from the American working class on his mother's side. He is the first half-American and the first multiracial baby in the history of British monarchy. He is a citizen of both the United Kingdom and the United States.

Archie's parents the Duke and Duchess of Sussex

A great-grandchild of Elizabeth II, Mountbatten-Windsor is seventh in the line of succession to the British throne, behind his father. He is also heir apparent to his father's Dukedom of Sussex.

His parents decided against his using a title, and he will be known as simply Archie Mountbatten-Windsor, with Master as a prefix when required. Because Prince Harry is the younger son of the Prince of Wales, his son is not automatically a British prince or entitled to be addressed as "Royal Highness", and was initially expected to be styled "like the children of any other duke" before any announcement had been made on this matter. Harry has the option of allowing his son to use one of his subsidiary titles as a courtesy title, such as "Earl of Dumbarton", but has chosen not to do so.

All content from Kiddle encyclopedia articles (including the article images and facts) can be freely used under Attribution-ShareAlike license, unless stated otherwise. Cite this article:
Archie Mountbatten-Windsor Facts for Kids. Kiddle Encyclopedia.