Arctesthes siris is a moth of the family Geometridae. It is endemic to New Zealand. 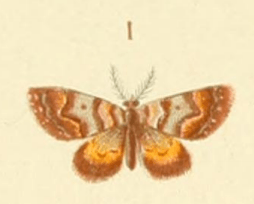 This species was first described by George Vernon Hudson in 1908 under the name Lythria siris. He based his description on specimens discovered by J. H. Lewis at approximately 1200 metres in altitude in the Old Man Range of Central Otago.

A. siris is only found in alpine areas of Otago where it prefers wetland areas and snow banks. It has been observed at altitudes of 1300 – 1500 metres. The species has been recorded in the Lammermoor Range, the Old Man and the Rock and Pillar ranges.

A. siris is a day flying moth and has been observed as an adult in February.

The host species for A. siris include mat-forming Coprosma species.

All content from Kiddle encyclopedia articles (including the article images and facts) can be freely used under Attribution-ShareAlike license, unless stated otherwise. Cite this article:
Arctesthes siris Facts for Kids. Kiddle Encyclopedia.