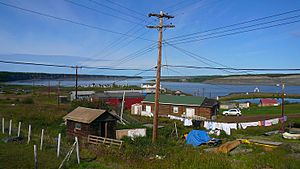 Confluence of Red Arctic River and Mackenzie, Tsigatchic, NWT
This page is about the river. For the community formerly called Arctic Red River, see Tsiigehtchic, Northwest Territories. For the river that flows into the Arctic Ocean basin, see Red River of the North.

The Arctic Red River is a tributary to the Mackenzie River in the Northwest Territories, Canada. In 1993 the river was designated as part of the Canadian Heritage Rivers System. It was also the name of a community on the Mackenzie where the river joins, now known as Tsiigehtchic. The Dempster Highway crosses the Mackenzie at this point.

The Arctic Red River's headwaters are in the Mackenzie Mountains, from where it flows 500 km (310 mi) northwest to its confluence with the Mackenzie. The river flows through a deep canyon as it flows through the Peel Plateau. The Gwich'in name for the river, Tsiigèhnjik, translates as iron river. The lower 200 km (120 mi) of the river are navigable by kayakers and canoers, without requiring portaging.

All content from Kiddle encyclopedia articles (including the article images and facts) can be freely used under Attribution-ShareAlike license, unless stated otherwise. Cite this article:
Arctic Red River Facts for Kids. Kiddle Encyclopedia.