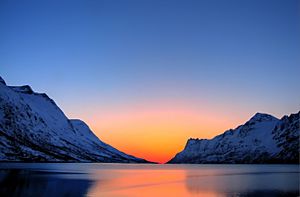 A sunset in the arctic region.

Arctic ecology is the science that studies the ecology of the arctic. The arctic is all land and water north of the Arctic Circle (66 33’). This area is very cold and has little rain. In the winter there is almost no sunlight. The growing season, when farmers can grow crops, is very short.

The arctic biomes are taiga, boreal forest, and tundra. Many of the ecosystems in the arctic are fragile, and can be easily destroyed. These ecosystems are being hurt by global warming.

The arctic environment includes both land and water. Two important parts of this environment are sea ice and permafrost.

Sea ice is ice that floats in the ocean. It is made of frozen seawater. It is important because animals live and sleep on the ice, especially in winter. Sea ice lasts all year and never melts completely. There is less ice during the summer than during the winter.

Lots of land in the arctic is frozen all year long. Permafrost is a substrate (layer of soil) that has been frozen for two or more years. The dirt on top of the permafrost is called the "active layer". This dirt melts during the summer and is important for plants to grow. 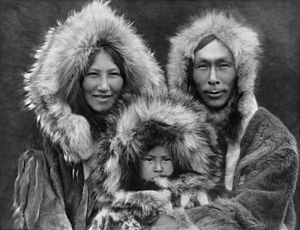 Inuit peoples are among the indigenous inhabitants of the Arctic.

Humans living in the Arctic region generally rely on warm clothing and buildings to protect them from the elements. Acclimatization, or the adjustment to new conditions, appears to be the most common form of adaptation to cold environments. No genetic advantage has been found when different people groups or races are compared. There is no evidence that fat is grown in response to cold, although its presence is advantageous. Amazingly, most people living in the Arctic region live a lifestyle very connected to the environment, spending significant time outside and depending heavily on hunting and fishing.

Animals that are active in the winter have adaptations for surviving the intense cold. A common example is the presence of strikingly large feet in proportion to body weight. These act like snowshoes, and can be found on animals like the snowshoe hare and caribou. Many of the animals in the Arctic are larger than their temperate counterparts (Bergmann’s rule), taking advantage of the smaller ratio of surface area to volume that comes with increasing size. This increases the ability to conserve heat. Layers of fat, plumage, and fur are also very effective insulators to help retain warmth and are common in Arctic animals including polar bears and marine mammals. Some animals also have digestive adaptations to improve their ability to digest woody plants either with or without the aid of microbial organisms. This is highly advantageous during the winter months when most soft vegetation is beneath the snow pack.

Not all Arctic animals directly face the rigors of winter. Many migrate to warmer climates at lower latitudes, while others avoid the difficulties of winter by hibernating until spring. Although these options might seem to be easy solutions to the difficulties of surviving an extreme environment, both are very expensive in terms of energy and risk of predation.

One of the most serious problems that plants face is ice crystal formation in the cells, which results in tissue death. Plants have two ways to resist freezing: avoid it or tolerate it. If a plant has taken the avoidance route, it has several different ways to evade freezing. It can build up insulation, have its stem close to the ground, use the insulation from snow cover, and supercool. When supercooling, water is able to remain in its liquid state down to −38 °C or −36 °F (compared to its usual 0 °C or 32 °F freezing point). After water reaches −38 °C (−36 °F), it spontaneously freezes and plant tissue is destroyed. This is called the nucleation point. The nucleation point can be lowered if dissolved solutes are present.

If a plant has taken the tolerance route, it has several different ways to tolerate freezing. Some plants allow freezing by allowing extracellular, but not intracellular freezing. Plants let water freeze in extracellular spaces, which creates a high vapor deficit that pulls water vapor out of the cell. This process dehydrates the cell and allows it to survive temperatures well below −38 °C (−36 °F).

Another problem associated with extreme cold is cavitation. Ring-porous wood is susceptible to cavitation because the large pores that are used for water transport easily freeze. Cavitation is much less of problem in trees with ring-diffuse wood. In ring-diffuse wood, there is a reduced risk of cavitation, as transport pores are smaller. The trade-off is that these species are not able to transport water as efficiently.

All content from Kiddle encyclopedia articles (including the article images and facts) can be freely used under Attribution-ShareAlike license, unless stated otherwise. Cite this article:
Arctic ecology Facts for Kids. Kiddle Encyclopedia.