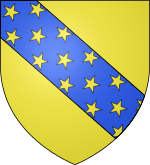 The Argis coat of Arms

Argis is a commune. It is in the Auvergne-Rhône-Alpes region of the Ain department; in the east of France. In 2009, 421 people lived in the commune.

The inhabitants are the Argissiens. In the Middle Ages there was a castle in Argis; but it does not exist anymore. There are also two cascades in the commune, the cascade de la côte and the cascade de la Pissoire.

All content from Kiddle encyclopedia articles (including the article images and facts) can be freely used under Attribution-ShareAlike license, unless stated otherwise. Cite this article:
Argis Facts for Kids. Kiddle Encyclopedia.