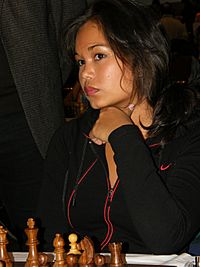 Arianne Bo Caoili (22 December 1986 – 30 March 2020) was a Filipino-born Australian chess player. She was awarded the title of Woman International Master (WIM) by FIDE. She won the Oceania women's chess championship in 2009. She also took part in seven Women's Chess Olympiads. She was born in Manila. She represented Australia starting in 2004.

Caoili starting living in Armenia from 2013. She died on 30 March 2020 in Yerevan. Her death was from from injuries caused by a car crash she had in two weeks before.

All content from Kiddle encyclopedia articles (including the article images and facts) can be freely used under Attribution-ShareAlike license, unless stated otherwise. Cite this article:
Arianne Caoili Facts for Kids. Kiddle Encyclopedia.