Kids Encyclopedia Facts
In this article, the patronymic is Vladimirovich and the family name is Dvorkovich.

Arkady Vladimirovich Dvorkovich (Russian: Арка́дий Влади́мирович Дворко́вич; born 26 March 1972) is a Russian public servant and economist, who was Deputy Prime Minister in Dmitry Medvedev's Cabinet from 21 May 2012 until 7 May 2018. He was previously an Assistant to the President of the Russian Federation from May 2008 to May 2012.

Dvorkovich is considered to be a close confidant of Dmitry Medvedev and an important figure in Russian politics. He rose to prominence during Medvedev's presidency but has recently suffered from the resurgence of Igor Sechin. Since 2015, he is also the Chairman of the Board of the Directors in Russian Railways company.

Dvorkovich's father, Vladimir Dvorkovich, was an international chess arbiter. Dvorkovich is an official of the Russian Chess Federation and was elected president of FIDE in October 2018, succeeding Kirsan Ilyumzhinov. 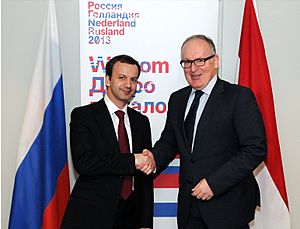 In 2018, he served as chairman of the 2018 FIFA World Cup Russia Local Organizing Committee, collaborating closely with FIFA President Gianni Infantino, who praised him for his work afterwards. Subsequently, on 3 October 2018, he was elected FIDE President, receiving 103 votes, ahead of 78 votes for FIDE Vice President Georgios Markropoulos; noted English GM Nigel Short withdrew his candicacy only minutes before voting commenced.

Some of Dvorkovich's professional interests are economic regulation, financial management, and tax planning. According to BusinessWeek (2003) Arkady was included in the list of 50 potential world leaders.

In addition to Russian, Dvorkovich also speaks English and German.

All content from Kiddle encyclopedia articles (including the article images and facts) can be freely used under Attribution-ShareAlike license, unless stated otherwise. Cite this article:
Arkady Dvorkovich Facts for Kids. Kiddle Encyclopedia.