Kids Encyclopedia Facts
This page is about the pastoral lease in South Australia . For the associated protected area, see Arkaroola Protection Area . 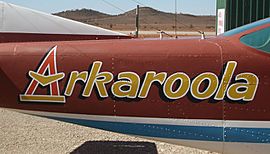 Arkaroola is the common name for the Arkaroola Wilderness Sanctuary, a wildlife sanctuary situated on 610 square kilometres (240 sq mi)* of freehold and pastoral lease land in South Australia. It is located 700 kilometres (430 mi)* north of the Adelaide city centre in the Northern Flinders Ranges, adjacent to the Vulkathunha-Gammon Ranges National Park and the Mawson Plateau. The most common way to get there is by car, but air travel can be chartered from Parafield Airport, Adelaide Airport or Aldinga Airfield. It is the atmospheric backdrop to the 2002 film The Tracker.

The area's first people are the Adnyamathanha. One of their dreamtime or creation stories says that Arkaroo, a mythical monster, drank Lake Frome dry. He then crawled up into the mountains. When he urinated he created the waterholes that are a feature of the area. His movement over the land created Arkaroola Creek.

The first Anglo-Europeans to visit the area was explorer Edward Eyre in 1840 and the surveyor George Goyder in 1857. There was a small failed settlement nearby, at the Yudnamutana copper mine, from 1860 to 1863. The drought of 1863 drove the miners away. Settlement didn't occur again until 1903, when rubies and sapphires were discovered. By 1910 a copper smelter was built at Yudnamutana and uranium was also discovered nearby by Douglas Mawson, famous Antarctic explorer.

The land was always marginal and projects failed quickly. Uranium exploration persisted sporadically and led to the development of good roads by optimistic companies. The Arkaroola property was fenced by 1935 and a process of eradication of pests started. The land was covered with donkeys and camels. There was a failed health project in 1948.

The Arkaroola Wilderness Sanctuary was established by geologist Reg Sprigg in 1968 after he purchased the pastoral lease. He had been involved in surveys in the area before that. He purchased the 610 square kilometres (240 sq mi)* pastoral lease (part of which is now held as freehold) and began the conversion to a wildlife sanctuary.

In July 2011 SA Premier Mike Rann announced a ban on mining in Arkaroola. This was followed in October 2011 by special purpose legislation prohibiting mining, mining exploration and grazing in the ranges. The SA government has moved to nominate the Arkaroola area for listing on the National Heritage list, and to secure its nomination for World Heritage listing.

Arkaroola was listed on the South Australian Heritage Register on 27 July 2012.

Until mid-2011, Arkaroola was under threat from uranium mining; the Adelaide-based mining company Marathon Resources had been prospecting and damaging the area around Mount Gee. In 2008, Marathon was found guilty of illegally dumping radioactive waste in a variety of locations throughout the Arkaroola Wilderness Sanctuary, and were ordered to suspend drilling operations. In late 2010, the government renewed the company's mineral exploration license, allowing it to resume exploratory drilling within the protected area, a decision which resulted in public outcry. A poll taken in February 2011 showed that 72 per cent of South Australians, and 79 per cent of Labor voters, were opposed to mining in Arkaroola. Following unprecedented public pressure, the South Australian government announced on 22 July 2011 that mining would be banned forever in Arkaroola, with the aim of national and World Heritage listing. Mining companies have since threatened legal action against the government.

Arkaroola is part of the 1,890 square kilometres (730 sq mi)* Gammon Ranges and Arkaroola Important Bird Area (IBA), identified as such by BirdLife International because it supports a population of the restricted-range short-tailed grasswren as well as populations of the pied honeyeater, chirruping wedgebill and cinnamon quail-thrush. 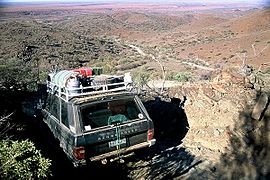 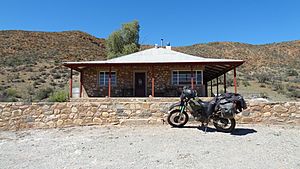 There are many self-drive tracks for 2-wheel drives and 4-wheel drives, ranging from beginner to advanced in difficulty. A popular attraction of Arkaroola is the organised Ridge Top Tour, which is a four-hour trip along the ridge top track with three lookouts that end at Siller's Lookout, providing a panoramic view across the plains towards Lake Frome and the Beverley Uranium Mine. Siller's Lookout is named after Bill Siller MBE, whose uranium exploration companies constructed the Ridge Top Tour track in the late 1960s; Beverley Uranium Mine, also discovered by Bill Siller's companies, is named after his wife, Beverley. The track was put in by Mr Jim Hodgekinson, an expatriate Canadian.

The Echo Camp Backtrack is also popular and is a very challenging drive. It leads through some wonderful country and then over the hills (rough) and down onto the plains east of the Flinders Ranges. This joins another track back to Arkaroola via Claude’s Pass, Stubb’s Waterhole (including aboriginal cave paintings), Bararranna Gorge (a popular spot for yellow-footed rock wallabies), Welcome Pound and back to main road to the Arkaroola Village.

Arkaroola has two 14-inch telescopes. Since the weather is usually fine and there is little light pollution, observers can see literally millions of stars with the telescopes.

The waters of Paralana geothermal springs, located at Wooltana, north of Arkaroola, issue from geological faults that date back one billion years. These waters are heated by rich veins of radioactive uranium ore in the faults. Carbon dioxide, nitrogen, radon and helium bubble forth continuously. Because the Paralana springs contain small amounts of uranium and radon, staying near the springs for a prolonged period constitutes a health hazard. Living on the floor of the springs is an extremophile algal mat that survives the warm temperatures of 62 °C and high radioactivity.

The mountain summit in the area under this name is of volcanic origin and is popular for rock climbing. The solid basalt rock means that climbing is relatively easy.

The climate of the area is arid, summers are hot with occasional storms, while winters are cold and dry. Arkaroola holds the record for the highest minimum temperature ever recorded in Australia, an overnight low of 35.5 °C (95.9 °F) occurred on the 24 January 1982.

All content from Kiddle encyclopedia articles (including the article images and facts) can be freely used under Attribution-ShareAlike license, unless stated otherwise. Cite this article:
Arkaroola Facts for Kids. Kiddle Encyclopedia.