Arothron stellatus, also known as the stellate puffer, starry puffer, or starry toadfish, is a demersal marine fish belonging to the family Tetraodontidae. It is found in shallow water in the Indo-Pacific region. 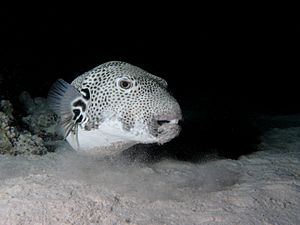 A. stellatus at Red Sea, Egypt

The background coloration goes from white to grey, and the body is harmoniously dotted with black spots. The ventral area is usually clearer. The size of the spots is inversely proportional to the size of the fish; thus, a young individual will have large spots and adults of maximal size will have small spots. The juveniles have a yellowish body background coloration with dark stripes. The young adults still have stripes on the ventral area that will turn to spots later, and also some recollection of yellow on the body. 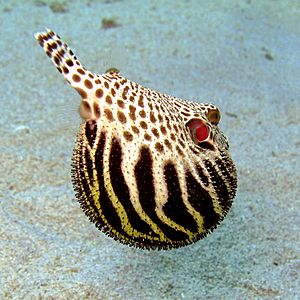 This species is found in tropical and subtropical waters from the Indian Ocean and Red Sea as far as Polynesia, southern Japan, the western, northern and eastern coasts of Australia and Lord Howe Island. It is a relatively uncommon species and lives close to external reef slopes and sheltered lagoons with clear water, but mainly in close proximity to sandy areas, at depths from the surface down to about 58 m (190 ft).

Arothron stellatus feeds on benthic invertebrates, sponges, algae, the polyps of corals such as Acropora, crustaceans and mollusks.

This pufferfish is diurnal. It is mainly solitary and defends a territory.

Arothron stellatus contains a highly toxic poison, tetrodotoxin, in its ovaries and to a lesser extent its skin and liver, which protects it from voracious predators. It becomes toxic as it eats bacteria that contain the toxin. To ward off potential enemies, they can inflate their bodies by swallowing air or water.

The World Register of Marine Species lists the following synonyms: -

All content from Kiddle encyclopedia articles (including the article images and facts) can be freely used under Attribution-ShareAlike license, unless stated otherwise. Cite this article:
Arothron stellatus Facts for Kids. Kiddle Encyclopedia.