The Art Gallery of Alberta (AGA) is an art museum in Edmonton, Alberta, Canada. The museum occupies a 8,000 square metres (86,000 sq ft) building at Churchill Square in downtown Edmonton. The museum building was originally designed by Donald G. Bittorf, and B. James Wensley, although portions of that structure were demolished or built over during a redevelopment of the building by Randall Stout.

The art museum was established in 1924 as the Edmonton Museum of Arts. In 1956 the museum was renamed the Edmonton Art Gallery. The museum occupied a number of location from its establishment in 1924 to 1969. The museum was relocated to its present location and reopened to the public in 1969 at the Brutalist Arthur Blow Condell building. In 2005, the museum was renamed Art Gallery of Alberta. From 2007 to 2010, the art museum underwent a CA$88 million redevelopment of its building. The redeveloped building was reopened to the public on January 31, 2010.

Its collection includes over 6,000 works, with a focus on art produced in Alberta, and other parts of western Canada. In addition to exhibiting its permanent collection, the museum also hosts travelling exhibitions and offers public education programs. 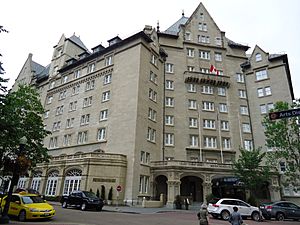 The museum held its first exhibition at Hotel Macdonald in 1924

The museum was established in 1924 as the Edmonton Museum of Arts, with a mandate to promote fine arts, and preserve historical relics from the region. The institution was established after Maud Bowman, the museums founding director and president enlisted the support of the Edmonton Art Club, and several other business, and political leaders.

In the first half of the 20th century, the museum occupied various sites including a former Edmonton Public Library building, and the fourth floor of the Civic Block and the Edmonton Motors; building before settling into the former home of Richard Secord in 1952. Recognizing that the majority of its collection, and exhibition activities were in the area of fine arts, the institution opted to change its name to the Edmonton Art Gallery in 1956.

Efforts to construct a purpose-built facility for the art museum began in 1962, after A. E. Condell bequeathed funds to the museum on behalf of her son, Arthur Blow Condell. Designs by architects Donald G. Bittorf, and B. James Wensley were chosen for the building, with the City of Edmonton donating 2,400 square metres (0.59 acres) at Churchill Square for the site of the new building. The building was opened in 1969, and was named the "Arthur Blow Condell Memorial Building". Further renovations to the building in 1977 saw the creation a new wing, replacing an exterior courtyard. 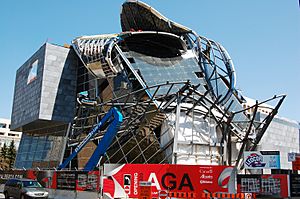 Construction for the museum's new building in May 2009

Proposals to renovate the building were made in June 1998, although serious discussions about its funding did not begin until 2001. In 2005, the museum launched an architectural competition, with 27 architects submitting applications. In September 2005, the designs from Los Angeles-based architect Randall Stout was chosen as the winning design for the museum. The redevelopment doubles the exhibition space within its structure, as well as provided an off-site storage site for its collection. On the same day the winning design was announced, the museum was renamed the Art Gallery of Alberta, in an effort to reflect its expanding focus on art from all of Alberta.

In April 2007, the Arthur Blow Condell building was partially demolished with significant portions of the existing structure incorporated into Stout's design. Construction of the new building formally began in June 2007. The museum was closed to the public from March 2007 to January 2010 in order to facilitate the construction of the new building; with a museum exhibiting its collection in a former Hudson's Bay Company property at Enterprise Square from April 2007 to December 2009. The museums inaugural exhibitions after the renovation included: Edgar Degas: Figures in Motion; Karsh: Image Maker; and The Murder of Crows, the North American premiere of Janet Cardiff and George Bures Miller's sound installation. After the museum reopened on 31 January 2010, annual memberships of to the Art Gallery of Alberta increased, with the museum seeing 30,000 visitors within the first six weeks of reopening. 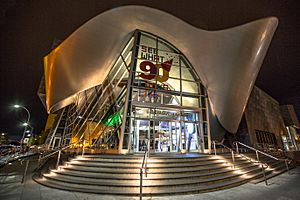 Southwest entrance to the museum. The steel ribbon built atop the entrance is intended to represent the auroras, and the North Saskatchewan River

The property is located at Churchill Square, a public square in downtown Edmonton. The building takes up an area of 8,000 square metres (86,000 sq ft), including 3,000 square metres (32,000 sq ft) of climate-controlled exhibition spaces. The building was designed by Randall Stouts Architects, Inc., from Los Angeles and San Francisco. Local architects and engineering firms HIP Architects, Stantec, BPTEC Engineering, and Read Jones Christoffersen assisted Randall Stout's design team; while Ledcor Group of Companies provided construction management for the project. The original budget for the renovation was C$48 million, although it was later increased to C$88 million.

The patinated zinc and stainless steel design was intended to demonstrate the museum's "commitment to contemporary art". The exterior of the building features a 190 metres (620 ft) steel ribbon, intended to represent the North Saskatchewan River, and the aurora, geographical phenomenons and features of Edmonton. The building's interior also features an "aurora" inspired room. The building includes a restaurant, espresso bar, gift shop, and an educational facility with a 150-seat theatre known as the Singhmar Centre for Art Education. The building includes a rooftop patio known as the City of Edmonton Terrace. The building also includes rental spaces for the public, such as Manning Hall.

The original structure on the property that was used by the museum, the Arthur Blow Condell building, was opened in 1969 with designs from Donald G. Bittorf, and B. James Wensley. The Brutalist-styled building was partially demolished in 2007 to accommodate the reconstruction of the building. However, approximately 67 per cent of the older museum structure was retained during the reconstruction, with most of the retained portions used as the new building's foundation, or lower floors. The new building's third-floor terrace was the roof of the Arthur Blow Condell building. 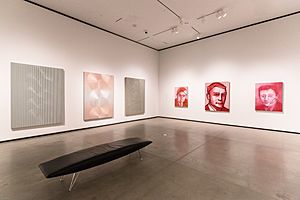 Works from the permanent collection on display at the museum

All content from Kiddle encyclopedia articles (including the article images and facts) can be freely used under Attribution-ShareAlike license, unless stated otherwise. Cite this article:
Art Gallery of Alberta Facts for Kids. Kiddle Encyclopedia.