Arthropodium cirratum (rengarenga, renga lily, New Zealand rock lily, or maikaika) is a species of herbaceous perennial plant, endemic to New Zealand, where it may once have been farmed. It is used for medicine as well as food, and has symbolic importance in traditional Māori culture. 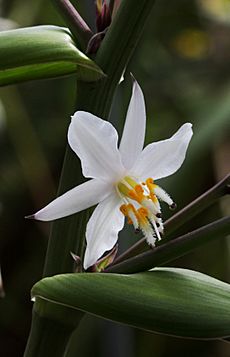 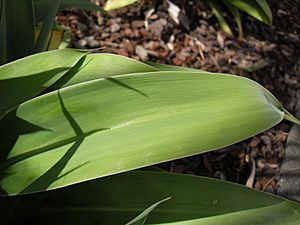 It was first described in 1786 as Anthericum cirrhatum by Georg Forster. In 1822, Robert Brown assigned it to the genus, Arthropodium, resulting in the name, Arthropodium cirrhatum (now A. cirratum.)

It occurs naturally north of Greymouth and Kaikoura near the sea and, as the name suggests, usually on rocks.

It is often grown as an ornamental plant. The rhizomes are edible when cooked and can be found throughout the year. The rhizomes were once eaten by the Māori after being cooked in a hāngi. William Colenso believed, for two reasons, that this plant was once cultivated by them: firstly, the plant grows much larger under cultivation than it usually does in the wild; and secondly it was often found near old deserted Māori homes and plantations. However, he lists it as only fourteenth in importance, in his list of eighteen kinds of wild vegetable food used by the Māori.

All content from Kiddle encyclopedia articles (including the article images and facts) can be freely used under Attribution-ShareAlike license, unless stated otherwise. Cite this article:
Arthropodium cirratum Facts for Kids. Kiddle Encyclopedia.