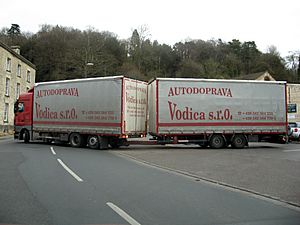 An articulated vehicle is a vehicle which has a pivot joint. This allows the vehicle to turn more sharply.

There are many kinds of articulated vehicles: buses, trams and trains may be articulated. Steam locomotives were sometimes articulated so the driving wheels could pivot around turns. In fact, the whole idea of a train is an articulated set of vehicles which run along a track.

Any vehicle towing a trailer could be described as articulated. The term (UK) of "articulated lorry" refers to the combination of a front part which pulls (the "tractor") and a rear part which follows (the "trailor"). 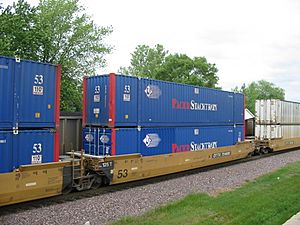 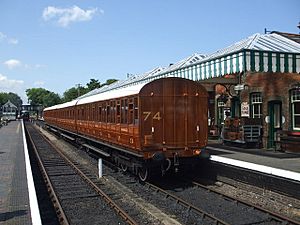 One of the first Articulated trains from 1924

The "integral unit", or "Integrated Tug and Barge" (ITB), comprises specially designed vessels that lock together in such a rigid and strong method as to be certified as such by authorities (classification societies) such as the American Bureau of Shipping, Lloyd's Register of Shipping, Indian Register of Shipping, Det Norske Veritas or several others. These units stay combined under virtually any sea conditions and the "tugs" usually have poor sea-keeping designs for navigation without their "barges" attached. Vessels in this category are legally considered to be ships rather than tugboats and barges must be staffed accordingly. These vessels must show navigation lights compliant with those required of ships rather than those required of tugboats and vessels under tow. "Articulated Tug and Barge" (ATB) units also utilize mechanical means to connect to their barges. ATBs generally utilize Intercon and Bludworth connecting systems. ATBs are generally staffed as a large tugboat, with between seven and nine crew members. The typical American ATB operating on the east coast, per custom, displays navigational lights of a towing vessel pushing ahead, as described in the '72 COLREGS.

An articulated Mercedes-Benz Citaro, bending as it turns a corner.

Buses are articulated to allow for a much longer bus which can still navigate within the turning radius of a normal bus.

In the UK, tractor unit and trailer combinations are referred to as articulated lorries, or "artics".

Many train cars are made with articulated connections, sharing a common truck between two cars. This reduces costs, weight, vibration and noise; and also enables higher speed running. One of the first examples of articulated railway carriages were used by London and North Eastern Railways in Great Britain on their London Suburban Trains in the mid-1920s ; these trains (rolling stock) were designed by Sir Nigel Gresley and built at the LNER's Doncaster Works. The four set "Quad-arts" were one of the very earliest articulated trains, this innovation was to save space. Although not the same as modern high speed trains where all the carriages share common bogies, they are an early form of the now more common design.

Trams and light rail vehicles have been made with articulated designs since the 1950s. This was instead of using trailers or multiple units, which had been attempted in the early 1900s. The articulated design allows passengers (and fare inspectors) to move the entire length of the vehicle, whether stopped or in motion. 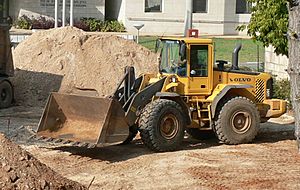 Volvo front loader on which the front portion pivots for turning

Front loaders, graders, dump trucks and other vehicles have been made with articulated joints to greatly reduce their turning radius. The most common models of articulated haulers are Caterpillar Inc., Volvo, and Terex trucks ranging in tonnage from 25 to 40 ton.

Some military vehicles, including the US military's M561 Gama Goat and the Swedish Bandvagn 206 were engineered with an articulated body for rough terrain capability.

All content from Kiddle encyclopedia articles (including the article images and facts) can be freely used under Attribution-ShareAlike license, unless stated otherwise. Cite this article:
Articulated vehicle Facts for Kids. Kiddle Encyclopedia.