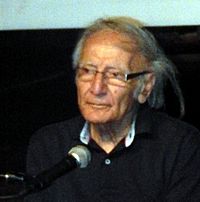 Arto Tchakmakchian (Armenian: Արտո Չաքմաքչյան, 26 June 1933 – 1 October 2019) was an Egyptian-born Canadian-Armenian sculptor and painter. He was a member of the Royal Canadian Academy of Arts. He was awarded by the Armenian Order of Honor in 2015. He was born in Cairo, Egypt and raised in Yerevan, Armenia. His career was based in Montreal, Canada.

In 1984 Tchakmaktchian won First Prize in the Wilfrid Pelletier Competition in Montreal for his bust of the competition's namesake. The work is on permanent display in the entrance hall of Place des Arts in Montreal. His works have also been exhibited at known museums internationally, notably in the Louvre. A notable exhibition was held at UNESCO Headquarters in Paris in 2010.

All content from Kiddle encyclopedia articles (including the article images and facts) can be freely used under Attribution-ShareAlike license, unless stated otherwise. Cite this article:
Arto Tchakmaktchian Facts for Kids. Kiddle Encyclopedia.