The Arts Tower is a building at 12 Bolsover Street in Sheffield, England belonging to the University of Sheffield and opened in 1966. A spokesperson for English Heritage tactfully described it as "the most elegant university tower block in Britain of its period" At 255 feet (78 m) tall, it is the second tallest building in the city, after the 331 feet (101 m) St Paul's Tower on Arundel Gate, which was topped out in 2009. Mitchell Construction a British civil engineering firm, built the Arts Tower. Photographs from their topping out ceremony in October 1964 help to document a different era in UK working conditions.

Designed by architects Gollins, Melvin, Ward & Partners, construction of the tower started in 1961 and lasted four years. Contrary to popular belief, there is no documentary evidence to suggest that the design was directly inspired by the similar, but much larger, Seagram Building in New York City, or for the theory linking it to the CIS Tower and New Century House in Manchester, England - although the similarity of aesthetics between the four buildings is undeniable. When asked about the possible inspiration of Mies van der Rohe's buildings in the United States, GMW project architect Robert Smith explained instead that the form of the building came from the surrounding context.

Entry to the building was originally made by a wide 'bridge' between fountains over a shallow pool area in front of the building. This pool was eventually drained and covered over when it was found that strong down drafts of wind hitting the building on gusty days caused the fountain to soak people entering and exiting the building. 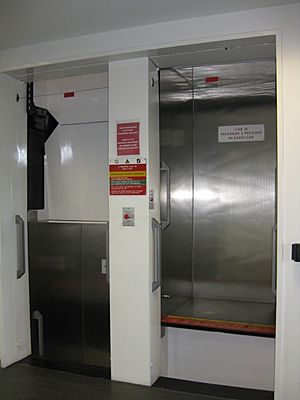 Circulation is through two ordinary lifts and a paternoster lift which, at 38 cars, is the largest of the few surviving in the United Kingdom.

A bridge at the mezzanine level links the tower to Western Bank Library. This building was also designed by Gollins, Melvin, Ward & Partners—the two buildings are intended to be viewed together. The Arts Tower and Library are Grade II* listed buildings.

The buildings can be visited during office hours, although visitors may have to sign a register and show identification.

The building was officially opened by Queen Elizabeth, The Queen Mother in June 1966; it has 20 storeys and a mezzanine level above ground. These housed the Departments of Landscape, Modern Languages, Philosophy, Biblical Studies, and Architecture as well as the library administration, before the building's refurbishment. As its name suggests, the building originally housed all 18 of the University's arts departments, which had far fewer students in the 1960s. Noticeboards for long rehoused departments such as History and Social Science survive in the basement foyer area. There are also two floors below ground level that house nine lecture theatres. The building contains a cafe in the basement. It has a student computer room on the 10th floor, and a self-service language teaching centre on the second.

In December 2007, the University announced plans for a major refurbishment of the Arts Tower. The refurbishment saw a major re-organisation of the building's interior, as well as a new façade, and coincided with the move of the modern languages departments to the Jessop West building, on the former Jessop Hospital site (Co-incidentally, Jessops was also a Grade II listed building, but the University demolished it in 2013 despite widespread public opposition) The building was vacated in April 2009, with refurbishment taking approximately two years to complete. The work was finished in time for the beginning of the 2011-12 academic year; the building is still used for teaching, with the top nine floors allocated to the University's School of Architecture and Departments of Landscape.

All content from Kiddle encyclopedia articles (including the article images and facts) can be freely used under Attribution-ShareAlike license, unless stated otherwise. Cite this article:
Arts Tower Facts for Kids. Kiddle Encyclopedia.