Arvida ( ar-VY-də) is a settlement of 12,000 people (2010) in Quebec, Canada, that is part of the City of Saguenay. Its name is derived from the name of its founder, Arthur Vining Davis, president of the Alcoa aluminum company.

Arvida was founded as an industrial city by Alcoa in 1927, when the first aluminum smelter was constructed. Located 240 kilometres (150 mi) north of Quebec City, south of the Saguenay River between Chicoutimi and Jonquière, the town was planned from the first day and was developed as a company town, to have a population of about 14,000 inhabitants, four Catholic parishes, and many other denominations, parishes and schools. It was known as "the City Built in 135 Days" and described by The New York Times as a "model town for working families" on "a North Canada steppe". 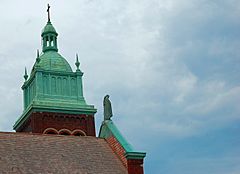 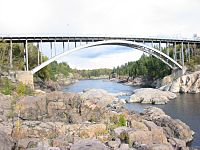 During World War II, the smelter was expanded and a large hydroelectric complex was built on the Saguenay River at Shipshaw (1 200 000 HP), becoming the largest aluminum production centre in the Western world. Because of its importance to the Allied war effort, the town was guarded by anti-aircraft batteries. The smelter transforms imported bauxite to alumina, and then to aluminum, by electrolysis. This process, and the smelting plant thereto, employed up to 7,500 people in the 1950s and the 1960s. The plant was due to close in 2005, as it had been replaced by at least three plants constructed during the last ten years in the Saguenay area. Rio Tinto Alcan continues to operate a smelter and related plants in the Arvida area.

In the early 1970s, survivors of the 1971 landslide at nearby Saint-Jean-Vianney were largely resettled to Arvida.

In 1975, the cities of Arvida, Kénogami and Jonquière were amalgamated into a new city, Jonquière. In 2002, this amalgamated Jonquière was merged with Lac-Kénogami, Shipshaw, Chicoutimi, Laterrière, La Baie and Tremblay township into the city of Saguenay.

In 2010, local Councillor Carl Dufour and others sought recognition from Parks Canada as a heritage site, the first step in applying for recognition as a World Heritage Site by UNESCO.

All content from Kiddle encyclopedia articles (including the article images and facts) can be freely used under Attribution-ShareAlike license, unless stated otherwise. Cite this article:
Arvida, Quebec Facts for Kids. Kiddle Encyclopedia.