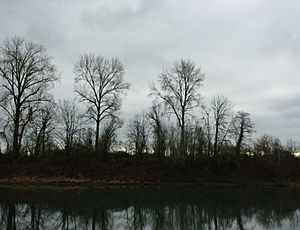 Ash Island is an uninhabited 137-acre (55 ha) island at river mile 52 on the Willamette River, in Yamhill County, Oregon, United States, near Dundee. The island is accessible by boat year-round from any nearby Willamette River landing. A private ferry carries agricultural equipment and workers to the island from Marion County, on the other side of the river.

Most of Ash Island is covered in sandy fields and, on the shores and southern end, forest. The elevation of the island ranges from around 50 feet (15 m) at shoreline to, the islands highest point, a "peak" around 80 feet (24 m). There is a wooden dam located at the south end of the channel on the left side of the island.

The island is home to a number of animals, including deer, fox, geese, ducks and bald eagles. The nearby river is a popular fishing spot for salmon, steelhead and bass.

All content from Kiddle encyclopedia articles (including the article images and facts) can be freely used under Attribution-ShareAlike license, unless stated otherwise. Cite this article:
Ash Island (Oregon) Facts for Kids. Kiddle Encyclopedia.