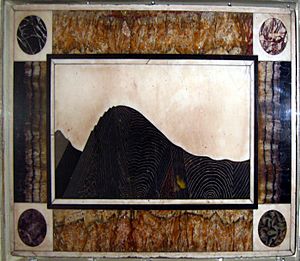 A picture of Ecton Hill made using Ashford Black Marble 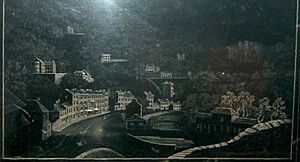 Henry Watson played important roles in the development of the local industry of inlaying Ashford Black Marble in the 1750s. He was the uncle of Derbyshire geologist White Watson, and had a water-powered mill at Ashford in the Water.

Pots, obelisks, and other decorative items of AMB were frequently traded during the late 18th and early 19th century. John Mawe had a museum in Matlock Bath that dealt in black marble. Ann Rayner carved Black Marble into pictures using a diamond. Many art objects of Ashford Black Marble are collected in local institutions, including those of Derby Museum, Buxton Museum, and Chatsworth House. In 2009, huge blocks of Ashford Black Marble were found underground in Derby. The auction of these was planed because these blocks are valuable. The rocks might have been abandoned when an Ashford Black Marble manufacturer moved in the 1880s.

Ashford Black Marble is a kind of limestone which contains some carbon, and its particles are very small. Its dark color is from bitumen, and once cut and polished, the surface shines. At first the rock was mined from Arrock Mine, and later in 1832 from nearby Rookery Plantation, near Ashford-in-the-Water. 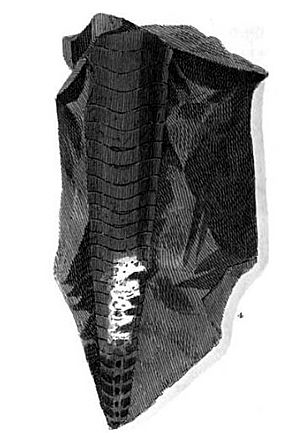 Ashford Black Marble can be manufactured into pots, candlesticks and other similar objects, or sawn to make smooth, flat items such as obelisks and paper weights. Derby Museum and Art Gallery has collections of worked and part-worked items of Ashford Black Marble, acquired from an inlaying workshop owned by the Tomlinson family. This collection also includes pieces of stones which were cut and ready to put into the black marble background. Forget-me-not and lily of the valley were typically designed. Various stones were used with Ashford Black Marble: Greys, blues and purples stones are from Monyash. "Rosewood" from Nettler Dale in Sheldon is a kind of barytes and has red and white layers. Castleton Blue John from Crich is a kind of flourspar and has purple and yellow colors. "Birds-Eye" rock has a design made from the fossils in it. "Duke's Red" is so valuable that it was stored at Chatsworth House. The tabletop design illustrated shows some of the combinations described here.

In the late 1780s, Derbyshire geologist White Watson made geological picture boards using Ashford Black Marble into which other local rocks were inlaid. These boards show layers of rock in different parts of the county. Derby Museum has a diagram of Ecton Hill made from Ashford Black Marble and other minerals.

William Martin was once a partner with Watson, and wrote the first scientific study of fossils. His Petrifacta Derbiensia says that White Watson's uncle and workers at the Black Marble mine called some of the fossils "crocodile tails", because they thought they were the remains of crocodiles.

In 2006, Buxton Museum bought the Black Marble collection that had been left by John Michael Tomlinson. He had spent over 50 years to collect them after finding that his ancestors had been involved in Ashford Black Marble manufacturing.

All content from Kiddle encyclopedia articles (including the article images and facts) can be freely used under Attribution-ShareAlike license, unless stated otherwise. Cite this article:
Ashford Black Marble Facts for Kids. Kiddle Encyclopedia.