Ashley Michele Greene (born February 21, 1987) is an American actress and model. She is best known for playing Alice Cullen in the Twilight Saga films.

Greene was born in Jacksonville, Florida. Her mother is Michele Greene (née Tatum), who works in insurance, and Joe Greene, a former U.S. Marine who now owns a concrete business. She grew up in Middleburg and Jacksonville. She moved to Los Angeles, California, at the age of 17 to pursue an acting career. Greene has an older brother named Joe.

At first, she planned to become a model. However, her manager told her that she was not tall enough to be a fashion model and that she should act in commercials instead. After taking commercial and acting classes, she realized that she liked acting more than modeling. Greene graduated from high school early and moved to L.A. to start her acting career.

She acted in the movie A Warrior's Heart with Kellan Lutz, who was also in Twilight.

Greene acted along with Miley Cyrus and Demi Moore in the drama movie LOL (2012).

In 2013, Greene was in the historical film CBGB about the former Manhattan music club with the same name.

Greene received an award from the PETA foundation because of her work with Avon, which does not do animal testing. She also received the "The Style Icon Award" from the magazine Hollywood Life at the Young Hollywood Awards. 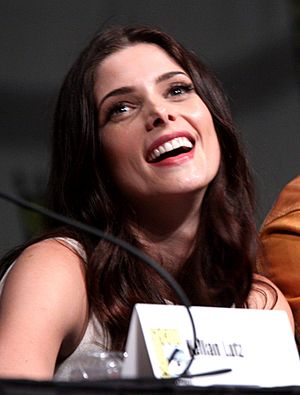 Greene at the San Diego Comic-Con International in July 2012

All content from Kiddle encyclopedia articles (including the article images and facts) can be freely used under Attribution-ShareAlike license, unless stated otherwise. Cite this article:
Ashley Greene Facts for Kids. Kiddle Encyclopedia.