Askia Mohammad I facts for kids 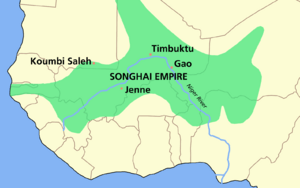 Extent of the Songhai Empire,
circa 1500.

Askia Muhammad I (1443 – 1538), born Muhammad Ture sylla or Muhammed Touré sylla in Futa Tooro, later called Askia, also known as Askia the Great, was an emperor, military commander, and political reformer of the Songhai Empire in the late 15th century. He was of Songhai and Soninke origins. Askia Muhammad strengthened his empire and made it the largest empire in West Africa's history. At its peak under his reign, the Songhai Empire encompassed the Hausa states as far as Kano (in present-day Northern Nigeria) and much of the territory that had belonged to the Songhai empire in the east. His policies resulted in a rapid expansion of trade with Europe and Asia, the creation of many schools, and the establishment of Islam as an integral part of the empire.

After Sunni Ali Ber died, Sunni Baru, his son and intended successor, was challenged by Muhammad because he was not seen as a faithful Muslim. This gave one of Sunni Ali Ber's generals, Muhammad Ture, a reason to challenge his succession. General Ture defeated Baru and ascended to the throne in 1493.

General Ture, later known as Askia Muhammad I or Askia the Great, subsequently orchestrated a program of expansion and consolidation which extended the empire from Taghaza in the North to the borders of Yatenga in the South; and from Air in the Northeast to Futa Djallon in Guinea. Instead of organizing the empire along Islamic lines, he tempered and improved on the traditional model by instituting a system of bureaucratic government unparalleled in Western Africa. In addition, Askia established standardized trade measures and regulations, initiated the policing of trade routes and also established an organized tax system. He was overthrown by his son, Askia Musa, in 1528.

Askia encouraged learning and literacy, ensuring that Songhai's universities produced the most distinguished scholars, many of whom published significant books and one of which was his nephew and friend Mahmud Kati. To secure the legitimacy of his usurpation of the Sonni dynasty, Askia Muhammad allied himself with the scholars of Timbuktu, ushering in a golden age in the city for scientific and Muslim scholarship. The eminent scholar Ahmed Baba, for example, produced books on Islamic law which are still in use today. Muhammad Kati published Tarikh al-fattash and Abdul-Rahman as-Sadi published Tarikh al-Sudan (Chronicle of The Black Land), two history books which are indispensable to present-day scholars reconstructing African history in the Middle Ages. The king's supposed tomb, the Tomb of Askia, is now a UNESCO World Heritage Site.

All content from Kiddle encyclopedia articles (including the article images and facts) can be freely used under Attribution-ShareAlike license, unless stated otherwise. Cite this article:
Askia Mohammad I Facts for Kids. Kiddle Encyclopedia.