Aslackby Preceptory in Lincolnshire lay to the south-east of Aslackby Church. Until about 1891 a tower, possibly of the preceptory church, together with a vaulted undercroft, survived as part the Temple farmhouse. Temple farmhouse was subsequently rebuilt and a 15th-century window and a stone pinnacle remain in the garden

History of the preceptory

The preceptory was, according to William Dugdale, founded either in or before 1164. This is recorded in Dugdale’s Monasticom, which states that Hubert de Rye presented the Templars with church of Aslackby with its chapel "in the year when Thomas, archbishop of Canterbury departed from the King [Henry II] at Northampton" – i.e., 1164. After the order was suppressed in the first decade of the 14th century, the property passed to Temple Bruer.

The word preceptory is used for the community of the Knights Templar which lived on one of the order's estates in the charge of its preceptor. From that its meaning was extended to include the estate and its buildings. The one at Aslackby was founded in 1192. Little of its structure survives, but early descriptions and sketches indicate that its church was like that at Temple Bruer Preceptory, a chancel with an apsidal east end and a round nave to its west. This was a standard design for Templar churches, in imitation of the Church of the Holy Sepulchre in Jerusalem. The best-known example in England is the Temple Church at the western end of the City of London. Later, towers were built at both the Lincolnshire churches, the one at Aslackby apparently around 1200, on the south side of the round nave. In 1192 there was already a village with a small castle. The honour of Craon was divided, and one third of a knight’s fee was granted to the Templars who managed it from Aslackby CW - U.T.

Aslackby, Iselby, or Aslaby, a small village two miles North of Folkingham, was formerly much noted for a Preceptory or Commandery of the Templars, founded by John le Mareschel, about the time of Richard I. They had the church and lands here by gift of Hubert de Ry before 1185, as appears by the rental made that year*; but the Preceptory might only commence from John le Mareschel, heir to Hubert de Ry, giving them the capital messuage about 1193.

According to Tanner, it was afterwards given to the Hospitallers; and, as part of their possessions, was granted, 33 Henry VIII. (1541), to Edward Lord Clinton.

Here was also a large round church, now rebuilt as a farm-house, still called The Temple. The embattled square tower remains at the South end, of two stories; the upper story was formerly open to the roof, but has of late years been fitted up as a chamber by Mr. Williamson, the present occupier. The lower story is the cellar, vaulted with groined arches, on whose centre are eight shields. The central one is charged with a cross, the others are: "A chevron charged with a crescent between three squirrels; Lovell.—In a bordure engrailed a chevron between three spread eagles.—Twenty roundels, a dexter canton, Ermine; Zouch.—Barry of eight, in chief a greyhound; Skipwith.—In a bordure engrailed, a chevron Ermine.—A chevron between three fleurs de lis—Three garbs quartering seme de lis, a lion rampant.—Ermine on a fesse, three crowns.

At other joints of the ribs:

Over and under the South window without are three shields, one charged with a cross, and the two next—On bend three birds.

§ A South view of this Tower, engraved by B. Howlett from a drawing by John Moore, is given in the Second Part of Collections for a Topographical History of the Hundred of Aveland, County of Lincoln, now publishing.

When the order was disbanded in 1312, most of the property was transferred to another order, the Knights Hospitaller. Whereas the Templars had been established to protect people on pilgrimages to Jerusalem, the Hospitallers had the additional concern of providing accommodation for them. Under the Hospitallers, the equivalent of a preceptory was a commandery, but Aslackby was not managed by the Hospitallers in this way. After 1312, the property was managed by leasing it out. Until the dissolution of the Hospitallers' order in England in 1540–41, the Aslackby estate was supervised from Temple Bruer, so the buildings lost their higher status use from the early 14th century, unlike most English monastic buildings, which were in use until the 16th century. In 1539, the buildings were said to be in ruins. After the Hospitallers' houses in England were dissolved, the Aslackby lands were transferred into the secular hands of Lord Clinton.

Evidence for the Medieval Preceptory

In 1789 Richard Gough in his revision of Camden states that the Preceptory might only have commenced when John Le Marshall, the heir to Hubert de Rye granted a messuage or principal dwelling in 1193. He goes on to state ‘‘Here was round church, now rebuilt as a farm house, and still called the Temple’. This would suggest that there was a local memory of a round church, similar to Temple Bruer Preceptory and that it may not have been finally demolished until the 18th century. Shortly after this in 1791John Byng the diarist, who later became Viscount Torrington, visited Temple farm. He records a turreted building and I was civilly shewn into the lower room , now a dairy, curiously arch’d with stone, and with coats of arms in the centre. Around this house was a great park, well timber’d and stock’d with deer, which was destroyed about eighty years ago. Byng also made a sketch of the tower with an arched doorway at ground level. In 1808 John Moore, the historian of the nearby town of Bourne, Lincolnshire published a note about Aslackby Preceprtory in The Gentleman's Magazine and promised a engraving of the Preceptory in the second part the History of the Hundred of Aveland. This was not published, but about 1835 an engraving of the village of Aslackby by W.Watkins from a sketch by J. B. Topham was published. This shows the Temple Farm and the Preceptory tower. 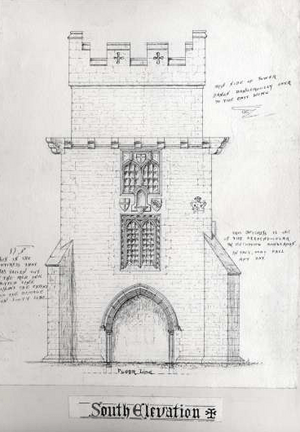 Aslackby Preceptory Tower at Temple Farm in 1892 before it collapsed 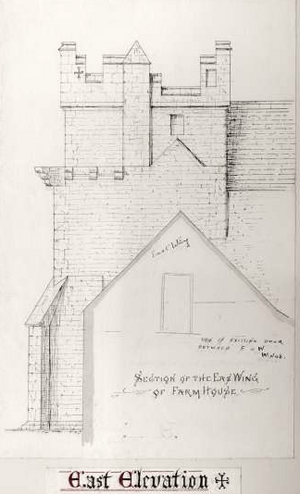 Aslackby Preceptory Tower at Temple Farm in 1892 before it collapsed

Towards the end of the 19th century its condition was giving concern and Society for the Protection of Ancient Buildings (SPAB) attempted to get the owners to restore the building, but demolition took place as it was thought to be too dangerous. Detailed drawings of the tower were made. It is noted that a number of architectural fragments were taken to a garden in Horbling. These fragments must be the arch from the lower floor of the tower which are at the Old Rectory, Horbling, and are now a Grade II listed structure.

All content from Kiddle encyclopedia articles (including the article images and facts) can be freely used under Attribution-ShareAlike license, unless stated otherwise. Cite this article:
Aslackby Preceptory Facts for Kids. Kiddle Encyclopedia.