Aspen Mountain is a long mountain located approximately 12 miles (19 km) south of Rock Springs, Wyoming and 5.5 miles (8.9 km) south of Arrowhead Springs, in Sweetwater County. The mountain gets its name from patches of Quaking Aspen trees located on the north and southern faces of the mountain. Various older topographical maps name the mountain "Quaking Aspen Mountain". Its primary use is for radio communications and it houses towers for various local and state companies. 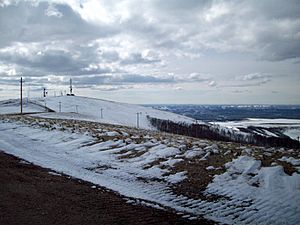 The mountain is named for its patches of Quaking Aspen trees on the north and south face.

Aspen Mountain also houses repeaters used by local highway patrol and local police and fire services for Sweetwater County, which are also present on nearby Wilkins Peak. If the local emergency repeaters on Aspen Mountain fail, they are automatically switched to the Wilkins Peak repeaters, and vice versa. The mountain also houses amateur radio repeaters, and a long range radar station (operated by the FAA) is the mountain's most visible feature.

Aspen Mountain lies to the north of the Uinta Mountains in the center of the Greater Green River Basin. It is part of the Rock Springs Uplift, and is composed of Miocene deposits.

Aspen Mountain can be accessed via a number of routes. From Rock Springs, access starts from Blairtown/Flaming Gorge Road, and begins on a road known as Little Bitter Creek Road. Aspen Mountain can also be accessed via county highway 4-27, which begins on Wyoming Highway 430. From the south, the mountain can be accessed via US 191. The roads are usually in good condition year round, weather permitting. Travel is still possible during winter months, but a four-wheel drive vehicle is recommended. The road on the mountain itself is known as "Radar Tower Road." Most of the mountain is not off limits, except for various radio towers with fences and the long range radar station, which features no trespassing signs and a fence around its perimeter. The radar site is also manned 24 hours a day, 365 days a year, with up to two employees watching the site at a time. In the winter, their only means of travel is often via Snowcats. 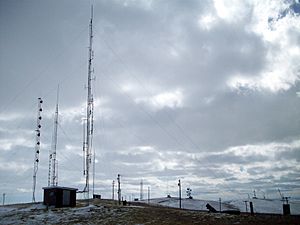 The eastern half of the mountain contains most of the TV and FM transmitters. 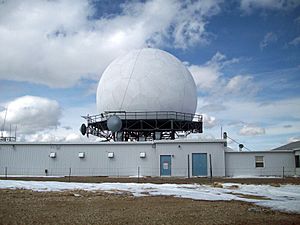 The FAA radar station at the highest point on Aspen Mountain.

All content from Kiddle encyclopedia articles (including the article images and facts) can be freely used under Attribution-ShareAlike license, unless stated otherwise. Cite this article:
Aspen Mountain (Wyoming) Facts for Kids. Kiddle Encyclopedia.