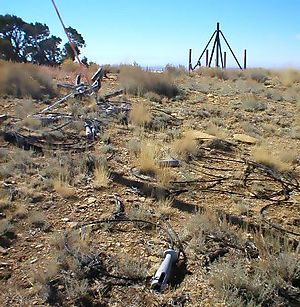 The remains of the KUWZ tower still present in 2005

Wilkins Peak is a small mountain located in Sweetwater County, Wyoming, between the cities of Green River and Rock Springs. It is primarily used for radio and television station transmitters, but it also serves radio needs of the FAA, EMS, and local businesses such as Questar Gas. In 2003, a tower on the peak was knocked down by a vehicle delivering propane to customers. The tower was owned by Wyoming Public Radio and was serving the local area with programming from National Public Radio. There are numerous access roads to the peak and it is not gated and open year-round, weather permitting. Along with the radio uses, the mountain is also a popular location for mountain biking and hiking. The mountain contains geology typical of its location in southwestern Wyoming.

Wilkins Peak holds radio towers for several FM radio and television stations. Stations include KYCS (95.1 FM) and its sister stations KFRZ (92.1 FM) and KZWB (97.9 FM). Also on the mountain is the tower for the station KTME 89.5, which signed on the air in September 2010. KTME is an affiliate of Pilgrim Radio. KREO 93.5 is the newest station on the peak. Several television translators transmit their signals from two small towers located in the center of Wilkins Peak. Additionally, the religious television network TBN has a translator known locally as K35CN, broadcasting from the mountain. Prior to 2009, K22BK, the local PBS television translator, carried its signal from Wilkins Peak. K22BK was moved across the interstate to White Mountain to the same tower as its digital counterpart. In late 2009, a new television station signed on the air from the peak. It is known as K33IX-D on channel 33 (UHF) and carries programming from EICB TV, a Christian religious broadcast and production company, based in Cedar Hill, Texas. K35CN and K22BK have been off the air since the digital television transition in the year 2009.

Wilkins Peak also has repeater towers for local police, fire, and EMS services. The emergency radio repeaters on the mountain are used in conjunction with other repeaters located on nearby Aspen Mountain and Mansface Hill.

In September 2003, a commercial truck delivering propane to customers on the peak knocked down the then-existent KUWZ tower after the vehicle's brakes failed. The collapse of the tower knocked out power to the mountain for several hours, and while KUWZ borrowed space from neighboring towers for several months thereafter, the station ultimately relocated its transmitter to nearby Aspen Mountain.

Wilkins Peak is not gated, and it can be reached via an unpaved road known as Wilkins Peak Road that starts on U.S. Route 191 southwest of Rock Springs, Wyoming. The mountain can also be accessed via another unpaved road that begins in the Scott's Bottom Nature Area in Green River, Wyoming. The peak is accessible year-round, weather permitting. The Green River access road is in worse shape than the Rock Springs side, and it has several road hazards such as steep grades, poor grading, and off-road vehicle traffic. Along with serving radio needs, the peak also is a popular hiking and mountain biking location in the area. There are many smaller roads and trails that spring from the peak that offer varied degrees of challenge.

The Sweetwater Mountain Bike Association, a committee of the City of Green River Chamber of Commerce and in partnership with the BLM, U.S. Forest Service and Rock Springs Grazing Association has sanctioned the mountain biking trail system known as the Wilkins Peak Trail System, currently a group of single track trails encompassing just over 24 miles located on land directly west of Wilkins Peak. Accessed primarily from the Green River area these trails offer a mix of varying difficulty levels for every rider. Current trail maps can be obtained for free at the Green River Chamber of Commerce at the Visitor Center.

All content from Kiddle encyclopedia articles (including the article images and facts) can be freely used under Attribution-ShareAlike license, unless stated otherwise. Cite this article:
Wilkins Peak Facts for Kids. Kiddle Encyclopedia.