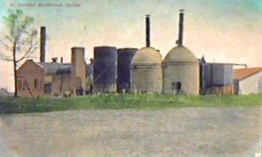 Asphaltum was platted by B. F. Rouse in 1901 at the peak of an oil boom in the area. An oil refinery was built by the American Lubricating and Refining Company and operated for a short time. The oil wells which led to the town's creation were fed by shallow deposits that soon failed to yield after hundreds of wells were put down in the area. The crude oil given up by these wells was sulphurous and of low quality.

There is no visible sign of the town's existence today, although local lore has it that there are some abandoned tanks behind a house in the vicinity, left after one of the periodic attempts by speculators to revitalize the field. There is a small-gauge oil well which once had a short stone base, in the yard of a house which sits within the official bounds of the former town site.

All content from Kiddle encyclopedia articles (including the article images and facts) can be freely used under Attribution-ShareAlike license, unless stated otherwise. Cite this article:
Asphaltum, Indiana Facts for Kids. Kiddle Encyclopedia.