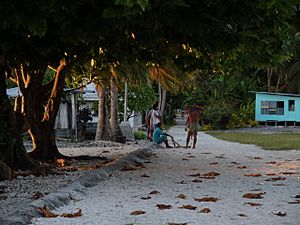 Dawn in the main street 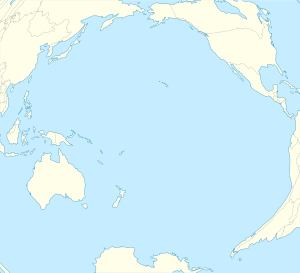 According to the 2016 census, 541 people officially live on Atafu (although only 413 were present the night the census was taken). Of those present, 78% belong to the Congregational Church. The main settlement on the atoll is located on Atafu Island in its northwestern corner. The Presbyterian church was established on the island in 1858, but today almost all of the residents belong to the Congregational Christian Church. The first village on Atafu was established at its southern end: Residents built houses along the lagoon shore to take best advantage of the cooling trade winds.

Fishing is traditionally done by the men on Atafu, and they are highly skilled at it. They use many traditional methods that are passed on from fathers to sons. They create very effective lures, fish traps, nets, and seines. They commonly use the technique called “noose fishing,” in which a circle of rope, tied with a noose knot, is dangled in the water; a large fish swims into the rope circle, lured by bait, and the noose is then tightened around its body, holding it fast. They also make well-crafted canoes, which they use for their fishing expeditions. 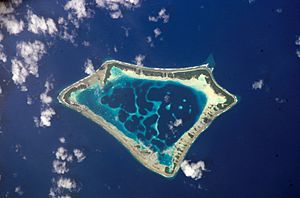 Atafu lies in the Pacific hurricane belt. In January 1914, a massive storm demolished the church and most of the houses on the islands, and wiped out many of the coconut palms.

The atoll is roughly triangular in shape and encloses a lagoon some five kilometres (3.1 miles) north to south by four kilometres (2.5 miles) east to west at its widest point. It is low-lying, reaching a maximum altitude of only some five metres (16 feet), and is heavily vegetated with coconut palms and other trees, with undergrowth similar to that found on many small central Pacific islands. Lizards, rats, and seabirds are common on Atafu island. The atoll attracts a wide variety of fish in large numbers.

The eastern side of the lagoon is a nearly continuous thin strip of land with one small break halfway along its length. In contrast, the western side is composed of reef and several distinct islands, notably the inverted V shape of Atafu Island in the north, Alofi, which extends into the lagoon from the western reef, and the L-shaped Fenualoa in the southwest. The smaller Tamaseko Island lies in the lagoon close to Alofi.

The reef which connects the islands of the atoll is shallow enough that it is possible to walk between the islands at low tide. This also means that there is no boat passage to the lagoon, although the ocean becomes deep very close to the reef. This allows for good anchorage, but also makes for rough seas close to the reef. The flatness of the atoll and its location within the tropical cyclone belt has led to damage to island properties on occasion.

Some 70 ha of the southern and south-western parts of the atoll have been designated an Important Bird Area (IBA) by BirdLife International because the site supports breeding colonies of brown and black noddiess and common white terns, with about 30,000 breeding pairs estimated in 2011. 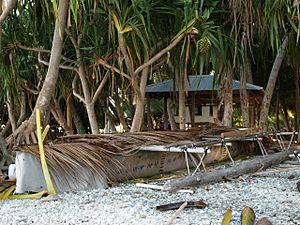 A traditional canoe or vaka

It is likely that Polynesians visited the island in ancient times, but they may not have settled there. The European discovery of the atoll came on 21 June 1765; it was made by John Byron, of HMS Dolphin. Byron found no one living on the island at that time. He named the island "Duke of York's island". Atafu was established by a couple, a husband, named Tonuia, and his wife, named Lagimaina, along with their seven children.

Between 1856 and 1979, the United States claimed sovereignty over the island and the other Tokelauan atolls. In 1979, the U.S. conceded that Tokelau was now under New Zealand sovereignty, and a maritime boundary between Tokelau and American Samoa was established by the Treaty of Tokehega.

On 26 August 2007, Ralph Tuijn, who was attempting to row a boat all the way from South America to Australia, crashlanded on Atafu. On 26 November 2010, three teenage boys from Atafu were rescued after having drifted 1,300 km (800 mi) for 50 days in the Pacific.

All content from Kiddle encyclopedia articles (including the article images and facts) can be freely used under Attribution-ShareAlike license, unless stated otherwise. Cite this article:
Atafu Facts for Kids. Kiddle Encyclopedia.