Atheris is a genus of venomous vipers found only in rain forest areas of Sub-Saharan Africa. There are currently eight species found. Atheris are commonly known as "Bush Vipers". They are all arboreal (meaning they live in trees), but they can sometimes be seen on the ground.

Bush Vipers are small snakes, with adults growing to the size of around 40 to 78 cm. They all have broad, triangular heads with large eyes and a slender body.

The Bush Viper lives in rain forest areas of Sub-Saharan Africa, far from humans, but some Bush Vipers are threatened because of habitat loss. 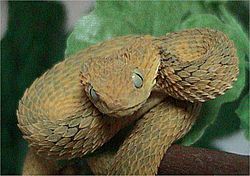 The head of a Variable Bush Viper

Bush Vipers eat small amphibians like frogs, and toads, reptiles like lizards and other snakes, rodents and birds. They ambush their prey by hanging on to a branch of a tree, waiting for a prey to come close, then jump on the prey and inject venom, and then swallow it. Some Bush Vipers in zoos only eat mice and small birds, but there have been reports on some eating each other.

All Bush Vipers are viviparous, meaning they give live birth. They mate between September and November, and females give to their young in March or April.

The venom of Bush Vipers is hemotoxic, it causes pain, swelling, and stop blood clotting. There is no antivenom, but there has been reports on Echis antivenom working on some Bush Viper's bites.

All content from Kiddle encyclopedia articles (including the article images and facts) can be freely used under Attribution-ShareAlike license, unless stated otherwise. Cite this article:
Atheris Facts for Kids. Kiddle Encyclopedia.